Dammam, printed by the Al-Mutawa Press for the Arabian American Oil Company, 1973.

Large folding map (60 x 90.5 cm), printed in colour, depicting the Kingdom of Saudi Arabia and its main roads. With on the right the title in both Arabic and English and a table with the distances from one city to another. Printed on two sides, one side with the map in English and the other in Arabic.

Bilingual road map of the Arabian Peninsula for Aramco employees. Focused on Saudi Arabia, the map shows the main roads, as well as surfaced roads, trails, roads under constructions and even proposed roads. A list titled "hints for survival" mentions extremely logical traffic rules such as "come to a complete stop at stop signs and observe stop-and-go signals" and "observe speed laws in the community where you live as well as on the highway". Placing common traffic rules under the header "hints for survival" makes one fear the worst for Saudi Arabian traffic in this period. The Arabic side of the map contains the same "hints" as well as a list of road signs in Arabic and English. A table lists the distance in kilometres from several towns and cities to some of the major cities: Buraidah, Dhahran, Dammam, Hofuf, Jeddah, Mecca, Medina, Riyadh and Ta'if. 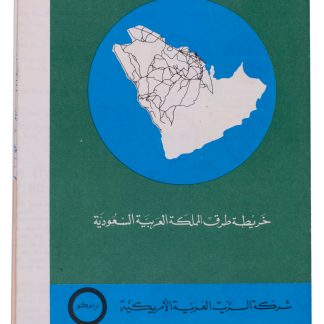