Aramco and the Arabic Superman: It's a bird! It's a plane! It's Nabil Fawzi!

The Arabic Superman issue of the Aramco World Magazine, with a charming illustration of Superman on the front and Batman and Robin on the back. An included article explains the history of these Arabic counterparts of these American superheroes. In 1964 the Arabic Superman was introduced into the Middle East operating under the guise of Nabil Fawzi instead of Clark Kent, followed a year later by Sobhi (Batman) and Zakkour (Robin). The comics of course read from right to left, as does the "S" on the costume of Superman. The article seems to be an important source on these Arabic comics. Other articles cover David Roberts, Cotton Castle, the history of Aramco and the journey of father Abd al-Masih. 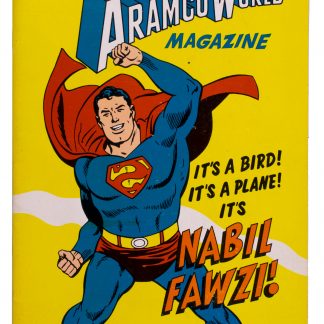