One of the earliest editions of an important and influential book of ca. 250 medicinal recipes: unrecorded issue of an extremely rare pharmacological edition

Crown 16mo in 8s (12 x 8 cm). 229, (11) pp. With a 6-line space (with a printed guide letter) left for a manuscript initial (not filled in) and 2 vine-leaf ornaments, Vervliet 56 & 80. Set in 3 sizes of roman type, the smallest including special pharmacological characters. Modern sheepskin parchment, but with gilt edges perhaps from an earlier binding.

Only known copy of the Jean Ruel issue of the very rare second (?) Paris edition of one of the most important early pharmacological books, with about 250 medicinal recipes arranged alphabetically, written by Thibault Lespleigney (1496-1550), apothecary and professor of medicine and pharmacology at Tours, where he first published it as Dispensarium medicinarum in 1538. It inevitably owes something to the ca. 1100 Antidotarium Nicolai, first printed in 1471 and almost the only comprehensive book on the subject when Lespleigney wrote, but it also foreshadows the pharmacopoeias. The term pharmacopoeia (meaning drug-compounding) was coined only in 1561, but is now used to refer to a collection of recipes officially authorized by a government or medical or pharmaceutical association, the first being Valerius Cordus, Dispensatorium (Nürnberg, written in 1542 but published posthumously in 1546). Before that books of recipes by leading pharmacologists served a similar role without any official authorization. Lespleigney's was the most important in France and enormously influential. About 10 editions appeared from 1538 to 1543 in Tours, Lyon, Paris and even Antwerp and Venice. François Chappuys revised, corrected and expanded Lespleigney's text for the second edition (Lyon, 1539), giving it the present title, and nearly all later editions, including the present, follow his revised text. The present edition clearly resembles Arnoul and Charles l'Angelier's 1541 Paris edition in style and layout, but does not follow it line by line. We have not seen the 1540 l'Angelier edition, with the same pagination as 1541, so they may be two issues of a single edition. We have also not seen what may be other issues of the present 1543 Paris edition, reported under various publishers: Jean Foucher, Vivant Gaultherot and Jean du Chemin. All three have the same pagination as the present edition, and at least the Gautherot shares a misprint (p. 206 numbered "209"), the same collation and the same VD16 fingerprint (ame- s,m- g*i* mepr, based on A2r, A6r, A7r and A7v: VD16 fingerprints substitute "*" for "æ"). So we probably have one or two Paris editions in 1540 and 1541 serving as the model for a 1543 Paris edition in four simultaneous issues. The USTC reports 2 copies of the 1540 Paris edition but no other Paris edition or issue. The Bibliotheque Nationale has a copy of the Du Chemin issue of the 1543 Paris edition and notes 2 further copies of the edition, in London (Foucher issue) and Stuttgart (Gaultherot issue). ICCU reports another at the Bibliotheca Comunale Ariostea in Ferrara (Gaultherot issue) and gives its VD16 fingerprint. The Casanata Library in Rome has a copy of the 1541 Paris edition, viewable on Google Books. All editions are very rare: the USTC records 0 to 3 copies for most and more (5 or 7) only for two editions: Venice 1542 and Lyon 1543. After 1543, Lespleigney's work lost popularity, perhaps due to the success of Cordus's 1546 Dispensatorium, but further editions appeared at Lyon under the title Enchiridion from 1546 to 1561, and the only other known Ruel edition appeared at Paris in 1567 (BMC STC French), all still very rare.

The book collates: 16mo: A-P8 = 120 ll., with I1, I3, K1 and K3 missigned K1, K3, L1 and L3 respectively. It is imposed with two 8-leaf quires worked together in each sheet (except that quire P may have been imposed alone, work and turn), so that each pair of consecutive quires contains one watermark divided at the upper fore-edge of leaves 5 and 6 in one quire, and the point-holes fall at the foot of leaves 3 and 4 (on the line where the sheet was divided to make two quires, so half of a point-hole can appear along the edge). Quire B shows a watermark shield (bearing a merchant's mark with some sign or letters above an upside-down 4) topped by a quatrefoil and with a letter or letters(?) below (about 38 x 18 mm, centred in a 21 mm space between chainlines); quires C, E, G, K, L and O show a watermark crown (about 26 x 23 mm) topped by a quatrefoil, with 3 circles in the slightly arched base and letters(?) below (possibly M followed by a curl, or SM), centred on a chainline, with about 22 mm between chainlines.

The fore-edge fold of H5/6 was carelessly opened, so that the upper outside corner of H5 is attached to H6 instead of H5, a couple pages show minor smudges and there is an occasional small marginal stain or tear, but the book is otherwise in very good condition and almost untrimmed, so that the tears that divided the sheets into half-sheets are mostly preserved at the foot (revealing point holes on several leaves) and part of a fore-edge fold survives. The boards are slightly bowed but the binding is also in very good condition. Unique issue of a very rare early edition of a rare but popular and influential pharmacological book of about 250 medicinal recipes: a predecessor of the pharmacopoeias that appeared in and after 1546. 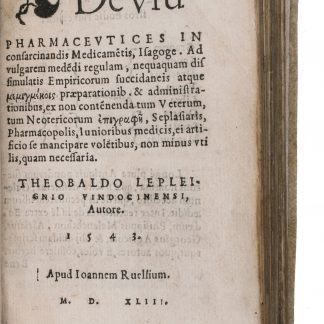