8vo (16.5 x 11 cm). (12), 86, (1 blank), (1) ff. With a finely executed woodcut on the title-page showing a female figure holding a cornucopia and with flowers and wheat growing at her feet (Flora? perhaps influenced by Fortuna and Demeter) repeated on the verso of the otherwise blank last leaf, about 20 woodcut initials with pictorial decoration (2 series, the smaller with a nearly complete alphabet and with more than one block for at least the E) plus about 20 repeats and a vine-leaf ornament (Vervliet 9). Set in an Aldine-style italic with preliminaries in Venetian-style roman and a few words of Greek. With: (2) Valla, Giorgio. De simplicium natura liber unus. Strasbourg, Heinrich Sybold, (August 1528). (104) ff. With the title in a woodcut architectural frame with a shield at the head bearing the (publisher's?) monogram (a cross with S, K and possibly H) and a woman playing a lute in the foot, and a vine-leaf ornament (Vervliet 7). Set in a Venetian-style roman type with frequent Greek printed in the fore-edge margins. (3) Odo of Meung (misattributed to Aemilius Macer). De herbarum virtutibus, cum Joannis Atrociani co[m]mentariis ... Ad haec. Strabi Galli [= Walafrid Strabo] Poetae et theologi clarissimi, hortulus vernantissimus. Freiburg im Breisgau, (Johann Faber, 1530). (4), 108 ff. With a space left for a manuscript initial at the opening of the main text, with a printed guide letter (not filled in). Set in an Aldine-style italic type with incidental Venetian-style roman and a few words of Greek. (4) Marbod of Anjou (with notes and additions by Georg Pictorius). De lapidibus pretiosis encheridion, cum scholiis Pictorii Villingensis. Eiusdem Pictorii De lapide molari carmen. [Freiburg im Breisgau, Johan Faber] 1531. 55, (1) ff. With a woodcut initial with pictorial decoration. Set in an Aldine-style italic.

4 editions containing 6 works, in 1 volume. Blind-tooled pigskin (Freiburg or vicinity?, ca. 1570?) over tapered wooden boards, sewn on 3 double supports, laced into the boards, each board with fields edged by multiple fillets, the outer field containing a frame made from a large roll with allegorical female figures representing the four theological virtues (204 x 16 mm: "Fides", "Ivsticia", "Caritas", "Spes"), central field containing 3 fleurs-de-lis, the 2 fields to its left and right each containing 2 rosettes and a vine leaf and those above and below each containing 1 vine leaf (these 4 fields separated by diagonals at the corners). On the lower board each of the 2 remaining fields (between these last 2 and the outer frame) contains a rosette and 2 vine leaves, while on the front board the lower one is blank and the upper one contains the owner's initials "AW". The 4 spine compartments have what appear to be larger fleurs-de-lis and perhaps also larger rosettes, but they are difficult to make out. With 2 engraved brass fastenings (catch-plate, clasp on a short pigskin strap and anchor-plate). 19th-century paper spine label.

(1): First edition of two pharmacological works by the Byzantine physician Paulus of Aegina (ca. 625-ca. 690). The first, Pharmaca simplicia, prepared for publication by the great German pioneer of scientific botany Otto Brunfels (1488?-1534), provides brief accounts of the properties and uses of about 750 pharmacological simples, the basic ingredients for preparing medicines, listed mostly in alphabetical order. The second, De ratione victus, prepared by Wilhelm Kopp (ca. 1461-1532) from Basel, who moved to Paris in 1512 and became personal physician to King Louis XII, describes about 100 medicines, including mushrooms.

(2): First edition of a posthumous pharmacological encyclopaedia by the humanist professor Giorgio Valla (1447-1500) at Venice. It contains brief instructions on the use of hundreds of herbal and other medicines, arranged alphabetically.

(3): A didactic poem in Latin hexameters explaining the therapeutic value of (originally) 77 kinds of herbs, now usually attributed to the French medieval physician, Odo of Meung in the last quarter of the 11th century, but formerly to Aemilius Macer (70-16 BC) and therefore sometimes called the Macer Floridus. It was a major influence on the Salerno Regimen sanitatis and through it on the Nicolai Antidotarium, making it a central work in the evolution of European medicine. Although first published at Naples in 1477, the present publisher's 1527 Basel edition first combined it with the shorter and more botanical and horticultural poem by Walafrid Strabo (ca. 808-849), first published under the title Hortulus at Vienna in 1510, both with important new commentaries and additions by Johannes Atrocianus (ca. 1495?-ca. 1543?), giving nearly a hundred kinds of medicinal herbs. The present edition is the second to include this additional material. Strabo's poem discusses his own garden and his tending of it, describing the herbs he grows and their medicinal uses.

(4): Third and best edition (the second separate edition) of the first lapidary, written in verse around 1100 by Marbod of Anjou, Bishop of Rennes. It gives a detailed account of a wide variety of precious stones, especially the magical powers and therapeutic properties of gems. It was first published at Vienna in 1511 and was included in a collection of the author's works, Liber Marbodi, at Rennes in 1524, but the present edition was carefully edited and annotated by Georg Pictorius, who also added a few verses of his own, including (perhaps intended as a moral lesson but also no doubt with a sense of humour) one devoted to a millstone. The present edition and the better known one published by Wechel at Paris in the same year, are very similar in text, collation and layout, but since both include Pictorius's dedication to Udalrico Wirtner in Freiburg im Breisgau, Wechel seems likely to have copied the Freiburg edition rather than the other way round. Although the edition gives no place of publication or publisher's name, the main text appears to be set in the same italic as the De herbarum virtutibus bound with it, supporting VD16's attribution to Johannes Faber in Freiburg im Breisgau. Sinkankas gives two entries for what appear to be the same edition, one erroneously giving the place of publication as "Freiburg im Bremen" and inexplicably naming an unidentified "P. Willig" as publisher.

The virtues roll on the binding matches the description of Haebler, Rollen- und Plattenstempel, Landesbibliothek Dresden 123 (on a Venice book dated 1566, not yet digitized), and the paper used for the endpapers and the blank leaves between the editions shows a Prague coat of arms watermark close to Briquet 2335 (recorded at Dresden 1564 but also at Eisenbach in 1571. Freiburg im Breisgau, in southwest Germany near the French and Swiss borders, where ads 3 and 4 were published is only about 30 km from Eisenbach and about 65 km from Strasbourg, where ads 1 and 2 were published, so the book seems most likely to have been bound in the region.

With a Hebrew owner's(?) name in red ink at the foot of the title-pages of ads 1 and 3, and a later owner's inscription at the head of the first title-page, partly erased. With several contemporary and later manuscript notes. With the first title-page slightly dirty, a faint water stain in the second, and minor marginal defects in 3 leaves of ad 3 (not affecting the text), but otherwise in very good condition. The impression of the tooling on the spine is no longer clear and there are a couple small holes and minor wear, but the binding remains in good condition, with most of the tooling on the boards sharp, so that the roll and stamps are very clear. Four rare Latin works from 1528 to 1531 on pharmacology, herbal medicine and the magical and therapeutic properties of gems, bound in blind-tooled pigskin (ca. 1570). 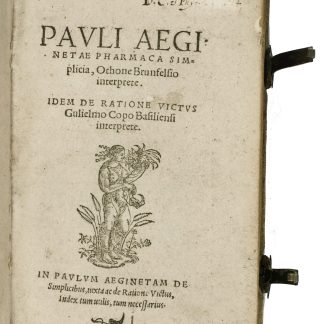