First edition of the Arabic Infancy Gospel, with text in Latin and Arabic

8vo. (22), 161, (7), 93, (3) pp. With title-page printed in red and black and decorated with Halma's engraved Athena and Demeter/Ceres device, a woodcut tailpiece, 3 woodcut decorative initials (3 different series) and a factotum built up from cast fleurons. With the main text in Arabic and a parallel Latin translation on the facing pages, and occasional words or lines in Greek, Hebrew and Syriac. Contemporary vellum, with manuscript spine title.

First edition of the apocryphal Arabic Infancy Gospel, with the Arabic text on the versos and the Latin translation on the facing rectos. Sike, a noted orientalist from Bremen, based his edition on a manuscript that was formerly owned by Jacobus Golius, and the many notes include excerpts from the Qur'an and other works. The work narrates miracle stories from the first 12 years of Jesus's life, and probably originated in the fourth or fifth century. Although scholars refer to the text as the "Arabic Infancy Gospel", it was most likely originally written in Syriac.

The wide range of non-Latin types, with not only Arabic and the more common Greek and Hebrew, but also a few words of Syriac, was unusual at this date. Although the book does not explicitly say it was printed by Halma, he had a printing office in Utrecht at this date, while Vande Water appears to have been merely a bookseller-publisher. The device also appears in their joint publications and those of Halma alone, but apparently not in those of Vande Water alone.

With a label with the shelf number of the Neander library on pastedown and a later manuscript presentation inscription on flyleaf. Some foxing, mostly along the margins, otherwise in very good condition. A couple of minor stains on the binding, but otherwise also very good. 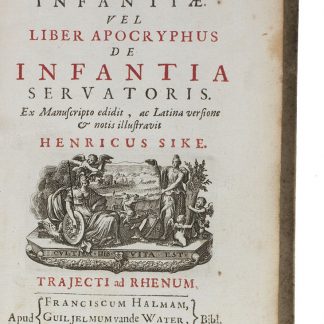