Abdul Hamid (Abdülhamid) II, Sultan of the Ottoman Empire (1842-1918). Document with calligraphy of the Sultan's tughra.

Probably the Sultan's exequatur for the Italian consul in Galati (now Romania), Stefano Castelli. Since 1856 the port of Galati on the Danube River gained importance as the seat of the European Commission of the Danube that was established in the Paris Treaty after the Crimean War. Representatives of the seven signatory states (Austria, France, Great Britain, Prussia, Russia, Sardinia, and the Ottoman Empire) were entrusted with regulating navigation along the maritime Danube. From 1859 to 1878 the United Principalities of Moldavia and Wallachia, today's Romania and Moldovia, although de facto independent were formally a vessel of the Ottoman Empire. Thus the Sublime Porte issued the exequaturs for diplomatic envoys to the United Principalities such as the consuls in Galati.

Together with a contemporary paper sleeve with a handwritten specification of the document in Italian: "Firmano di riconoscimento o berat d'exequatur di Stefano Castelli come Console d'Italia a Gallatz rilasciato da Sultan Abdul Hamid". "Firman" is a term for a royal decree in the Ottoman Empire, "berat" is another Ottoman legal term for a patent. 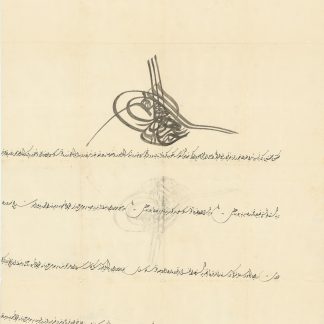