A letter addressed to Jean Gesner, a professor of mathematics at Zurich, in which Bernoulli expresses his hope that the baths Gesner is taking are having a positive effect. He also thanks Gesner for the money he sent with his last letter. Concerning his late father's works, Bernoulli informs Gesner he will sell them to the latter's friend for a slightly lower price than whatever price any given bookseller would ask. Bernoulli ends his letter by referring to Jacques-Barthélemy Micheli du Crest (1690-1766), a Swiss military engineer, physicist, and cartographer, known for designing a thermometer based on the expansion of alcohol, calibrated using mercury. At the time of Bernoulli's letter, Michele du Crest was ill and in a Swiss prison for his political activities. Bernoulli writes that Micheli's life "is not in danger although if he is allowed to remain alive it is not due to a lack of willpower to make him die. Yet why does he not simply make thermometers for which he is more skilled even than disrupting republics" (transl. from the French original).

Usual folds, scattered foxing, and a small piece of paper loss where the paper was attached to the seal. Overall good. 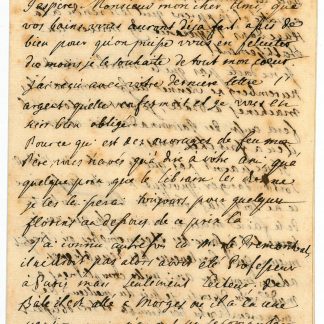