IV: The same. L'autographe au salon de 1865 et dans les ateliers. Ibid., [1865]. (2), 98 (instead of 104) pp. One volume in half red morocco over red cloth, with giltstamped title to cover and spine; two volumes in half calf over black cloth with giltstamped spine and spine titles. Marbled endpapers.

A considerable run of the semi-monthly (and later weekly) periodical of autograph facsimiles, issued by the French journalist Villemessant between 1863 and 1872 as a supplement to Le Figaro, in a decorative three-volume set. The encompassing set reproduces the handwriting of many prominent figures of history, including Napoleon Bonaparte, Horatio Nelson, Giuseppe Garibaldi, and Lord Palmerston, as well as such artists as Leonardo da Vinci and Michelangelo, writers like Alexandre Dumas, the composers Hector Berlioz and Franz Liszt, and scientists like Alexander von Humboldt. In addition, momentous documents such as the warrant of execution of Mary, Queen of Scots are included.

A rich source of study and reference and an asset to any autograph collection. 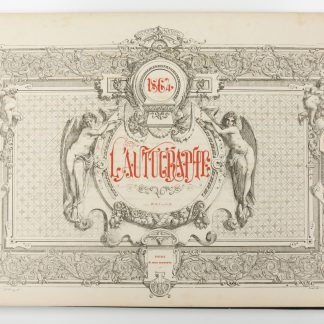