A landmark in the literature of Portuguese expansion in the East: rare, almost all copies having perished in the Lisbon earthquake of 1755

Second edition of Galvao's great history of exploration and voyages, including the Portuguese conquests on the Arabian coast, in the Gulf, and in the Kingdom of Ormus. The first edition, published in 1563, is considered virtually unobtainable, as only some five or six copies are known to exist. "This second edition, says Innocencio, 'has been equally rare for many years, since almost all copies were lost, in the house of a bookdealer, during the Lisbon earthquake'" (Borba de Moraes). Galvao's text was translated in 1601 by Hakluyt, who complained about the rarity of the first edition even then, and had to rely on a copy sent from Lisbon.

Born in 1503, Galvao was sent to India in 1527, and after distinguishing himself there, he was appointed governor of the Moluccas. He maintained a keen interest in military and religious affairs throughout his career, and spent the latter part of his life assembling accounts of the voyages that comprise this collection. He provides a relatively succinct chronological list of ancient and modern discoveries to the year 1550, including those by Columbus, Cabral, Cortés, and Pizarro. "Ce livre est divisé en deux parties: la première traite des premières navigations, y compris celles faites par les Espagnols et les Portugais dans l'océan Atlantique et aux côtes d'Afrique. La seconde partie contient toutes les découvertes faites par les Espagnols et les Portugais en Amérique et aux Indes jusqu'en l'année 1550" (Leclerc). "The author has been styled 'the founder of historical geography'. The book gives a good summary of the geographical explorations of the Portuguese and other important voyagers, including the English" (Hill). 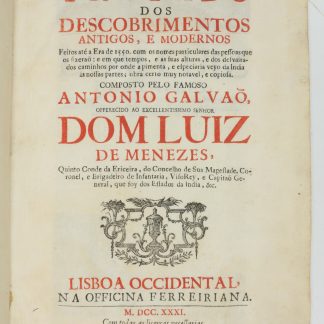