The principal writing of Abu Ali al-Husain ibn Abdullah ibn Sina (ca. 980-1037), the "Qanun" is the most authoritative medical text in the Islamic world. Written in Arabic, it was widely translated throughout the Middle Ages and formed the basis of medical training in the West as late as the mid-17th century. Through this encyclopedic work, the author exerted "perhaps a wider influence in the eastern and western hemispheres than any other Islamic thinker" (PMM). "The 'Qanun' [...] contains some of the most illuminating thoughts pertaining to distinction of mediastinitis from pleurisy; contagious nature of phthisis; distribution of diseases by water and soil; careful description of skin troubles; of sexual diseases and perversions; of nervous ailments" (Sarton, Introduction to the History of Science). "[Avicenna's] Canon is one of the most famous medical texts ever written, a complete exposition of Galenism. Neuburger says: 'It stands for the epitome of all precedent development, the final codification of all Graeco-Arabic medicine'. It dominated the medical schools of Europe and Asia for five centuries" (Garrison/M. 43).

The present two volumes comprise the complete Third Book, fen 1-12 and 13-22, and thus cover the principal part of the Qanun: special pathology and therapy "a capite ad calces" (from head to toe), including ailments of the ear, nose, and throat, as well as obstetrics. Volumes 1 and 4 (not present here) comprised books I (452 ff.) and book IV, fen 1 (142 ff.); books II and V were not part of this edition.

Provenance: traces of removed bookplates on pastedowns. According to a pencil note on the inside front cover of the first volume, the set was removed from the Fritzlar Cathedral Library, parts of which were dispersed in 1724 and in 1803. Later sold at Venator (Cologne), sale 23/24 (1962), lot 15 (with illustration plate IV); old sales notice pasted to inside front cover of first volume. 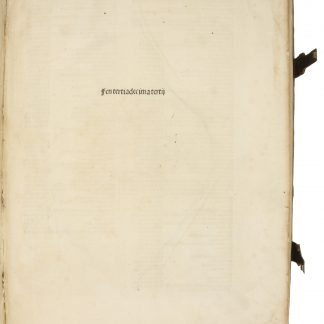