The authority on British falconry

First edition of a complete and important treatise on the art of falconry by F. H. Salvin (1817-1904), in which he describes the various species of birds used in England, both hawks and falcons. ''The best English book on falconry and a very attractive publication'' (Schwerdt).

The treatise is illustrated with lithographs by William Brodrick (1814-1888); they show 21 falcons and 5 hawks; plates 22-24 depict equipment used for falconry. The stones for the first edition were destroyed after publication so the plates for the second edition (London, 1873) had to be redrawn.

With bookplate of Leon Colin Somervell on front paste-down. Some pages and plates reinforced, two plates loose, some spotting, but still in good condition. Binding discoloured and slightly worn. 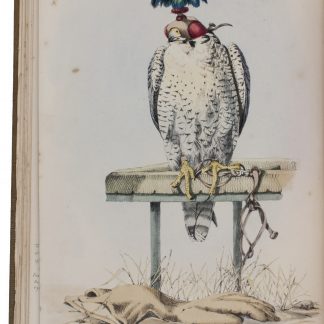