4to. (20), 387, (1) pp. With woodcut title-vignette, 16 folding woodcut plates and numerous woodcut illustrations in text, some of which full-page. Contemporary limp vellum.

Rare second Italian edition of this "important and independent" (Jähns) artillery manual first published in Venice in 1586 in Italian, then in a more extensive edition in 1592 in Spanish. This second Italian edition is no mere re-issue of the 1586 edition, but "is sufficiently different to be considered a distinct work. Collado, dissatisfied, probably, with the first attempt, rewrote the book in his native tongue" (Cockle). "Of particular interest are Collado's notes on the artillery school in Burgos, founded by Charles V" (Jähns). The illustrations mostly show cannons and their positioning in the field and on fortifications.

From the collection of Thomas Fremantle, 3rd Baron Cottesloe (1862-1956), commander of the Territorial Army and president of the Society for Army History Research. Unlike the 1586 and the 1641 edition, this second Italian edition is rarely seen at auction. 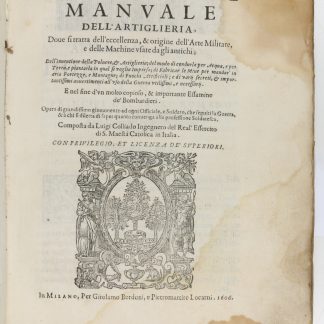