Extremely rare second English edition of the author's "Les discours militaires" (the second part, with its own title-page but beginning on leaf O1, still in the first edition). "A book frequently quoted from, and, in its time, highly esteemed. It has now become very scarce, and is almost unknown to bibliographers; neither Hazlitt nor Lowndes, Brunet nor Graesse, mentions it. The Second Part, which was intended by Du Praissac to be used as a 'corollary', or epitome of his other tracts, is to be found separately" (Cockle). The first part deals with all subjects, such as levying, marching, building forts, ordnance, fireworks, duties, etc. The second belongs to one of three first edition issues printed by Daniel in Cambridge in 1639, each with varying imprints.

John Cruso (1595-1655) wrote, edited and translated military works before the English Civil War. Born in Norwich, his parents had fled Hondschote in Flanders. He was the captain of the Dutch/Walloon company of the Norwich trained bands. "Cruso's military works were significant in that they were the first to make the new continental, primarily Dutch, military literature available to an English-speaking audience" (ODNB).

Provenance: from the collection of Thomas Fremantle, 3rd Baron Cottesloe (1862-1956), commander of the Territorial Army and president of the Society for Army History Research, with his armorial bookplate to pastedown (purchased from Pickering & Chatto, 30 Dec. 1898, for £3-18s). 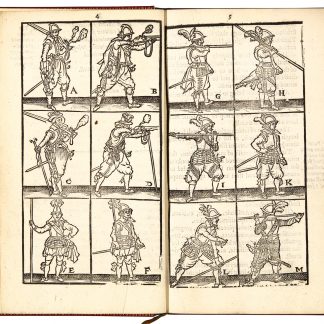