Only edition: the "first fruits of Arabia" (Hogarth, Life of Charles M. Doughty, 1928), and the first publication in English of any account of Doughty's travels, predating "Travels in Arabia Deserta" by four years. (In spite of the French publication, the "Note de M. Doughty sur son voyage", comprising pp. 7-35, is entirely in English.) Doughty (1843-1926) first met the great French orientalist and writer Ernest Renan in 1883, and after the failure of his attempt to sell to Berlin the copies of the inscriptions he had made in the region of El-Hejr and Medain Salih, Renan wrote the preface and supervised the publication of Doughty's work in Paris.

Occasional light foxing, mainly confined to endpapers, but an appealing copy, removed from the University of Lancaster Library with their bookplate to the flyleaf and their stamp to the title-page; additional armorial bookplate to pastedown. 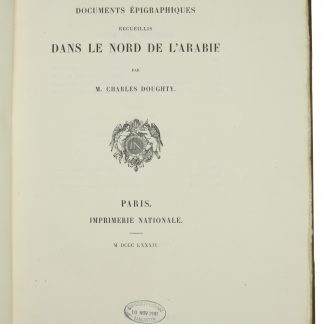