The Hunter Map of Arabia

Two sections of Hunter's large and extremely detailed map of the Arabian Peninsula and Gulf, showing the Red Sea coast of Saudi Arabia with the 'Asir, Hejaz and Nejd regions, as well as most of Yemen, with Kuwait and Southern Iraq. The two eastern sections, which covered Oman, the UAE, Qatar, Bahrain and part of eastern Saudi Arabia, are not present.

Such was the detail of Hunter's map that the Survey of India reissued it, with corrections, several times during the First World War and interwar period. As the maps were issued in parts and used on active service it is not unusual for sections to be missing. Many of the surviving copies show signs of official use; this issue bears a flight route, sketched out in red ink, along the southern Gulf coast to Baghdad. 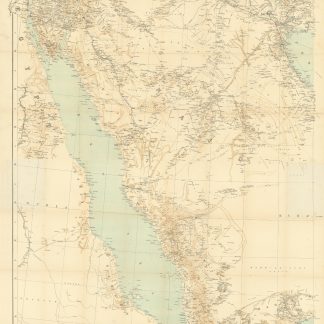