Clive, Robert. A Series of Lithographic Drawings from Sketches by Robert Clive, comprising the undermentioned subjects, lying principally between the Persian Gulf & the Black Sea [...].

First edition of this rare lithographic plate book of Mesopotamian antiquities and views. The first instalment of a total of three, containing nine lithographs: 1. Sculptures at Nimroud-Lions; 2. Moosul; 3. Hît; 4. Distant view of Mount Ararat; 5. Arab encampment near the Birs Nimroud (on one sheet); 6. Sheikh Adi; 7. Baghdad; 8. Roman ruin on the way to Palmyra; 9. Sculptures in the Mount at Nimroud. The Victoria and Albert Museum ascribes this work to the artist Robert Charles Clive (1827-1902).

Original torn and somewhat defective front wrapper laid down on heavy paper and bound into a modern half calf binding; plates and binding fine. The two-page list of plates with descriptions is also laid on heavy paper. 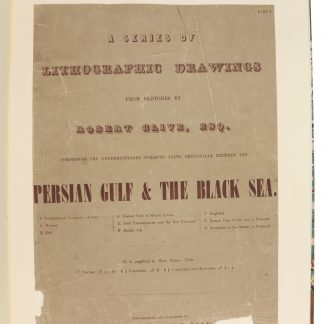 You're viewing: Clive, Robert. A Series of Lithographic Drawings from Sketches by Robert Clive, comprising …London, 1852. € 18,000.00
Add to cart