Mavrogordato, John George "Jack". A Hawk for the Bush. A Treatise on the Training of the Sparrow-Hawk and Other Short-Winged Hawks.

4to. XVI, 144 pp. With 7 numbered plates (4 of which coloured) and several black and white illustrations in the text. Original full cloth with stamped falcon to front cover and stamped spine-title.

A standard work of modern falconry literature by one of the most renowned falconers of the 20th century, the British lawyer Mavrogordato (1905-87). This "excellent book" (Gallagher) is directed at a new generation of falconers choosing to work with the previously frowned-upon sparrowhawks instead of falcons, but also addresses experienced hawkers. It includes observations on the choice of a suitable bird, the treatment of eyasses, the falconer's equipment, and the calling-off of a bird, as well as the animals' diet and health.

The charming illustrations were carried out by the British artist George Edward Lodge (1860-1954), himself an authority on falconry. The plates show muskets and goshawks sitting or in flight; the text illustrations mainly display tools used by the falconer, including hoods, knots, and perches. 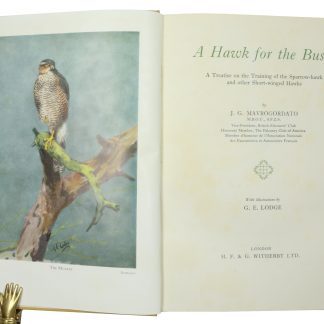