Rare first and only edition of a primary source on South African flora, especially the Cape of Good Hope area, by Johannes Burmann (1707-79), Dutch physician and botanist at Amsterdam. "The nomenclature is here often in agreement with that of the Hortus Cliffortianus [of Linneaus]; Burmann accepts the Linnaean generic reform as brought about by the Genera plantarum and attempts, though not yet consistently, to coin his phrase names in a purely diagnostic way in the Linnaean manner" (Stafleu, Linnaeus and the Linnaeans, p. 166). The illustrations are drawn from the Codex Simon van der Stel, the Herbarium Witsenianum, and the Codex Witsenii. The artist was most likely the physician Hendrik Claudius of Breslau, who had arrived in Cape Town in 1682 to make watercolours of the local plants, with a medical interest. Simon van der Stel ventured on an expedition to Namaqualand in 1685-86 and had drawings of plants made for him, it is possible that Claudius accompanied him and made the drawings. In Cape town copies of these drawings were made for the burgomaster of Amsterdam, Nikolaas Witsen and via that route they served as the source for the engravings in the Rariorum Africanarum Plantarum. An important work with the first illustrations of many Cape of Good Hope plants.

Bookplate on first end paper of Guy Tinant and ink ownership on the second endpaper by the same, dated 1975. 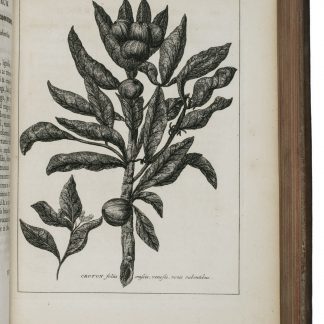