4to. (16), 247, (1), 15, (1) pp. With 111 etched plates depicting plants, an elaborate woodcut tailpiece with an eagle feeding her young, caterpillars, dogs, and flowers, as well as a woodcut printer's vignette on the title-page. Early 18th century (?) richly gold-tooled mottled calf, in a panel design with a large centre-piece of curlicues, gold-tooled board edges, marbled end papers and gilt edges.

First edition of an overview of exotic plants were recently discovered by the Dutch. The foreign plants were brought back to the Netherlands by ship from around the world and planted in various botanical gardens to be studied. With the help of new botanical technology such as greenhouses it became possible for the first time to cultivate exotic plants such as orchids in the colder European climates. Paul Hermann (1646-95) had excellent contacts and based his work on various Dutch botanical collections that held plants from the Americas, from Africa (Egypt), the South Indian Ocean regions, and Asia. Mentioned plants include passion fruit, cacti, and papaver. Hermann himself served as director of the Hortus Botanicus at the University of Leiden and contributed to this work specimens from India, Africa, and Sri Lanka. He died in 1695 while at work on a number of important publications, this one of them. His widow was able to complete the "Paradisus Batavus" and got influential English botanist William Sherard (1659-1728) to edit her husband's work. The publication raised the bar for floral publications and set the standard so high that it inspired Linnaeus to write his "Flora Zeylanica" (about the plants of Sri Lanka).

Some copies include a four-page laudatory poem to the author, not present here. Most copies of this first edition have 110 plates, while the present volume contains 111. Some of the depicted plants are the first ever to be documented in European cultivation. Although the plates are referred to as engravings it appears more likely that they are etchings. The anonymous illustrations seem to be aimed at showing the whole plant, including the roots, leaves and twigs, rather than just the blossom or fruit that the plant produces. The woodcut tailpiece is signed "C" (possibly Nagler Monogrammisten 2151).

Boards slightly warped, but still a very good copy. From the library of William Cavendish-Bentinck, the 6th Duke of Portland, with his engraved armorial bookplate on the upper pastedown. 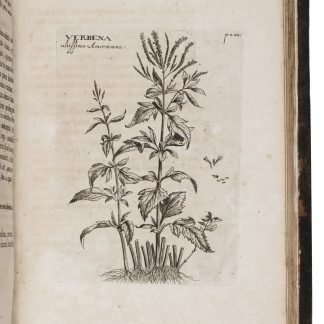