4to. (20), 171, (1) pp. With large engraved arms of William V of Orange to dedication leaf. Full vellum with handwritten spine title.

First edition of this famous collection of Arabic proverbs by the Persian-born scholar Zamakhshari (1075-1144), edited and translated by Hendrik Albert Schultens (1749-93), professor of oriental languages at the University of Leyden.

Little is known of Zamakhshari's youth. He was apparently well-travelled and resided at least twice (once for an extended period of time) in the holy city of Mecca, where he earned his nickname, Jar Allah. As a philologist, he considered Arabic the queen of languages, in spite of the fact that his own native tongue was Persian (and though he wrote several minor works in that language).

Occasional light browning due to paper. Blindstamps of the library of Haverford College, Pennsylvania, to title and dedication. A good copy. 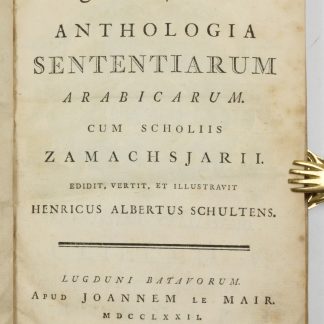