Ottoman Cartography: Mecca, the Hejaz and the Hajj

Large 4to (260 x 328 mm). 26 bi-chrome lithographed double-page maps (each 485 x 315 mm), with 48 sheets of interleaved text, all contents unnumbered and entirely in Ottoman Turkish. Original half black cloth over red boards with cover bearing the title and the Tughra of Sultan Mehmed V Reshad in gilt.

This is one of the rarest and most extraordinary works of late Ottoman cartography, produced by the Interior Ministry at the behest of the "Young Turks" regime on the eve of World War I. Published with text entirely in Ottoman Turkish, the atlas consists of 26 double-page maps, all of an extraordinary proto-modernist design, accompanied by detailed text explaining all of the road itineraries depicted. All of the maps are original productions, predicated upon the latest official sources supplied by both state engineers and private contractors. Of the maps, eight focus exclusively upon subjects from the Arab world, including a dedicated map of the Hejaz (with the Hejaz Railway and pilgrimage routes), as well as a map focussing upon Mecca and Jeddah. The atlas provides by far and away the most comprehensive and accurate record of the road system throughout the Ottoman Empire, taken in the wake of an unprecedented wave of infrastructure development. Additionally, while not part of the technical remit of the work, the maps also provide a stellar overview of the Ottoman railway system, including the Hejaz Railway and the in-progress Anatolian-Baghdad Railway. The atlas therefore gives the most authoritative historical accounts of the technical nature of the empire’s key corridors of military and commercial movement, as well as the most important routes of the Hajj Pilgrimage, during a critical historical juncture.

Internally remarkably clean and crisp, just some light natural oxidization of the original glue along the gutters of some leaves and light even toning to text pages, plus a few negligible stains, but overall in a very good condition. 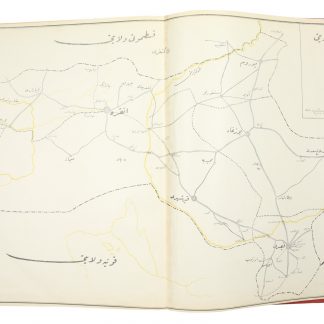