Hand-drawn designs for weaving patterns, in use for decades

Oblong small folio (316 x 227 mm). Ink and German manuscript on paper. 48 leaves with a total of 43 ink designs for weaving patterns (one in red ink, the remainder in black). 4 small cloth samples laid down to a sheet of designs, and one large floral cloth sample (ca. 110 x 230 mm) pasted to an otherwise blank leaf. Some additional material loosely inserted. Contemporary half calf over marbled boards. Traces of cloth ties.

A rare survival: an extensive and early hand-drawn weaving pattern book compiled and, as was common, kept in constant use over several decades, apparently by the Schmidt weaving mill of Künzelsau. The designs are drawn in black ink on unmarked sturdy paper, rather than on the lithographed squared sheets available even then: presentations of the finished motifs in their horizontal and vertical grid of warp and weft, as well as diagrams indicating the number of threads per row. While it is likely that the simple workshop in which these designs were drawn and copied still operated a handloom, the more advanced weaving mills would transfer precisely such designs to punch cards, to be fed into the programmable looms first developed in the early 19th century by the French weaver Joseph Marie Jacquard. His invention would prove to have paved the way for the computer when the English mathematician Charles Babbage realized that such a programmable machine could be fed punch cards to execute complex calculations rather than weaving patterns, and it is therefore perhaps not without reason that these weaving designs appear to resemble hand-inked pixel images.

The patterns correspond in their general design to those published in contemporaneous printed collections, all of which today are of the utmost rarity. Even later editions of such books have proved almost unobtainable, as they typically remained in heavy workshop use, often for more than a century, until they literally fell to pieces. Thus, it is all the more surprising to find a manuscript specimen in such good overall condition, aside from the quite heavy fingerstaining and the frequent instances of ink corrosion due to the iron gall ink used.

Binding rubbed, corners bumped, spine chipped at both ends, but altogether well preserved. Ink ownership "Schmidt" written on front pastedown (as is the word "oben", indicating the orientation of the volume). Loosely inserted at the end of the album is a large, folding printed set of patterns, once a supplement to the July 1846 issue of the trade journal "Weber-Bild- und Muster-Zeitung" (no. 7, plate 21); also, two loose leaves with additional patterns drawn in pencil; a small piece of cardboard with a floral motif cut through for embroidering; and two letters: one from a satisfied customer in Stuttgart, dated 15 October 1863, sending 11 guilders for a tablecloth; and another from Leonhardt Stein of Rothenburg, dated 20 May 1863, inquiring about damask cloth samples and addressed to Mr. Schmidt of Künzelsau (with additional weaving diagrams pencilled to verso). The damask weaving mill of Georg Schmidt, located at the heart of Germany's Hohenlohe district, is attested as late as 1874 in Christoph Sandler's trade manual "Handbuch der Leistungsfähigkeit der gesammten Industrie Deutschlands" (vol. II, p. 123). 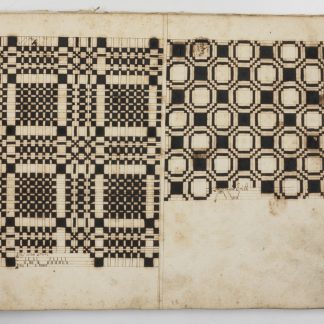