The Martyr of Lebanon: autobiography of an Arab prisoner of conscience

Extremely rare autobiography of As'ad al-Shidyaq (1798-1830, brother of the writer Faris), who came under the influence of the American Congregationalist missionaries in Beirut when he was employed by them as a teacher and translator, and embraced Protestantism in defiance of the Maronite Patriarch. In retaliation, the Patriarch imprisoned and tortured al-Shidyaq in a convent in the Lebanese mountains, starving him to death in 1830. Al-Shidyaq's autobiography, the story of his conversion and persecution, was published three years later by the CMS press of Malta. "This of course is also anti-Catholic, or rather anti-Maronite. It has been quite erroneously attributed to his brother Faris al-Shidyaq by a number of eminent authorities, who have cited it as the latter's earliest work. In fact it is clearly by As'ad himself, being written in the first person, and his mentor Isaac Bird has recorded that it was written in 1826 at his (Bird's) request, 'that we might make use of it to his advantage in future time'; English translations were published in Boston (USA) in 1827 and 1839 and it was later incorporated into Bird's biography of As'ad, published in 1864" (Roper, p. 239).

A clean copy in very good condition. Copies known only at the British Library and Glasgow University. 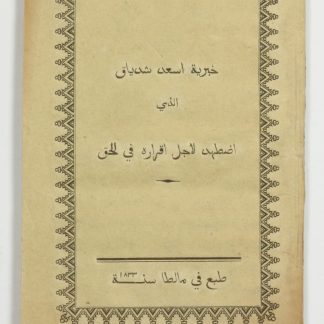