First edition of this synopsis of the political and religious history of Japan, by the Belgian diplomat, photographer and writer Eggermont (1844-1923), who was appointed councillor to the legation of Belgium in Japan from 1876 to 1877. Author's presentation copy for the Sultan with the dedication giltstamped to the upper cover. The book's first part discusses Shintoism and Buddhism; the second part presents an overview of Japanese history from the origins of the Japanese people until the 1868 Meji Restoration.

Lacks upper half of the title-page; lower half is transposed before the half-title and glued on top of it, thus omitting the author's name.

From the library of Sultan Abdul Hamid II (1842-1918), the last Sultan of the Ottoman Empire to exert effective contol over the fracturing state and also remembered as a poet, translator and one of the dynasty's greatest bibliophiles. While his passion for books is memorialized by the many precious donations he gave to libraries all over the world and which mostly have remained intact to this day (including the 400-volume "Abdul-Hamid II Collection of Books and Serials" gifted to the Library of Congress), his own library was dispersed in the years following his deposition in 1909: books were removed to other palaces and even sold to Western collectors; the greatest part of his collection is today preserved in the Chester Beatty Library in Dublin. 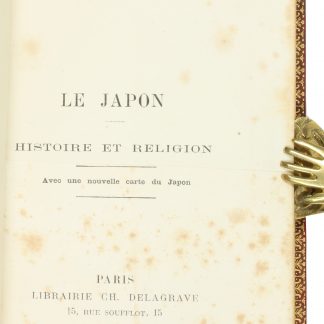