Einstein and the Atomic Age: "And what is E=mc² without Einstein?"

Einstein, Albert, German physicist and Nobel laureate (1879-1955). Copy of typewritten script of the episode "The Atom" of the TV programme "Your World Tomorrow" by Joseph Mindel, signed by "A. Einstein".

4to. 28 pp. and relevant correspondence. Stored in custom-made half morocco solander case.

Signed by Albert Einstein in ink in the upper right corner of the first page: the original script of a 1946 NBC programme on "The Atom", which dramatises Einstein's discovery of the iconic E=mc² equation. A unique survival documenting the enormous popular interest in Einstein's achievements, especially his special theory of relativity and its relationship to calculating the energy produced by atomic fission - a highly topical subject in the spring of 1946, less than a year after the nuclear bombings of Hiroshima and Nagasaki. July of the same year would see the "Operation Crossroads" nuclear weapon tests conducted at Bikini Atoll, to enormous publicity.

Accompanied by a copy of a typed letter to Professor Einstein from the writer Joseph Mindel, originally enclosing the script, reading: "I am writing a series of science television scripts, which are to be produced by N.B.C. [...] The first of the series deals with the atom. I am enclosing a copy. No story of the atom would be complete without E=mc². And what is E=mc² without Einstein? It was thus necessary to portray you briefly in one of the scenes. As you know, your permission is needed for the portrayal [...] Since the script is to be televised on May 14th, won't you please try to give me an answer by that date? [...]" (9 May 1946). Further includes a typed letter from Helen Dukas, Einstein's secretary, confirming his permission to use his name in the programme (10 May 1946), and the copy of a typed letter from Mindel asking to have the script returned "with a few words from Professor Einstein" (16 May 1946).

Light creasing; some staining to top margin of typescript, due to rusty paperclips, but finely preserved in all. 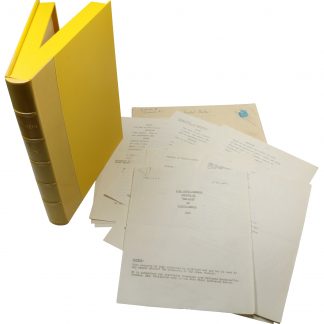