From the library of the distinguished British Arabist Samuel Barrett Miles

First edition, from the library of the distinguished British Arabist Colonel S. B. Miles, one of the primary contributors. The British Raj maintained close surveillance over the Trucial States of Eastern Arabia before the Arab states gained independence, and the Transactions of the Bombay Geographical Society contain some of the most significant publications dealing with Arabian matters of the time.

The articles in the present volume are:

iii) Some Account of the Navigation of the Nerbudda or Narmada River, with Remarks on the Gulf of Cambay, by William Sowerby.

iv) Index of the Towns, Villages, &c. in the Fund Zilla of the Bombay Presidency, with introductory remarks, by J. Burgess.

v) Tides and their Action, Geologically and Geographically considered, by William Sowerby.

vi) Report on the portion of the African Coast in the vicinity of Bunder Murayah, the chief port of the Mijjertheyn tribe of Somalis, by Capt. S. B. Miles.

vii) Journal of an Excursion made by Capt. S. B. Miles, Bombay Staff Corps, in company with Mons. Munzinger, from Howr, returning to Aden through the Fudhli Country, giving a General Description of the Country and of the several Arab Tribes occupying it, as also a Report upon the Geography of the District, by Mons. Munzinger.

viii) Memorandum on the Tribal Divisions in the Principality of 'Oman, with a Map showing the General Distribution of the Tribes, and a Table showing the Genealogy of the Ruling Dynasty of Muscat, by Lieut.-Colonel E. C. Ross, Political Agent at Muscat.

The last article is illustrated by a large map of Oman, measuring 620 x 885 mm, hand-coloured in outline: “Map of Omân showing Distribution of the Principal Tribes. Compiled for Official Use by E. C. Ross, Political Agent, Muscat”, showing the entire peninsula from Abu Dhabi ("Abu Thebi") and Dubai (“Debay”) to Ra’s Jibsh. The map was compiled by Ross, based on a chart by Constable and Stiffe (1857-60), combined with interior detail from Wellsted and Whitelock's map (1835-37), with corrections of spelling and "some additions from original native sources." The “Hinawi” tribes are shown on the map in red letters and the "Ghafiri" tribes in blue, together with known routes.

Provenance: Colonel Samuel Barrett Miles (1838-1914), Political Agent in the Gulf region (1872-86); donated to Bath Public Library in 1920 by his widow, later de-accessioned, with the usual library label, accession numbers, and blind stamps to the title, letterpress, and maps. Miles was educated at Harrow and entered the East India Company’s military service in 1857 as an ensign in the 7th Bombay Native Infantry. His first contact with Arabia came with a regimental posting to Aden in 1866. The following year he was appointed cantonment magistrate and assistant resident, and after returning to India he transferred to the Political Service. In October 1872 Miles was appointed Political Agent and Consul at Muscat, a position he held on and off until 1887. During this time, he undertook several important expeditions into the Omani interior. In 1874 he made sailing trips to al-Ashkarah, Qalhat and Sur, and the following year became the first European in decades to visit al-Buraymi, subsequently visiting Jabal Akhdar, Ra’s Fartak, and Qishn. In 1884 he became the first European to traverse the Wadi al-Ta’iyin. In 1885 he made one last significant journey, up the Wadi Sama’il to Izki, Nizwah and Dank, before returning to India in 1887, his time in Muscat having been interspersed with postings as Political Agent in Turkish Arabia, Consul-General in Baghdad, Political Agent and Consul in Zanzibar, and Political Resident in the Gulf.

He retired to England in 1893 and a collection of his writings, The Countries and Tribes of the Persian Gulf, was published posthumously in 1919. Reviewing the work, Sir Thomas Holdich, the leading military surveyor of his day, praised Miles’s “unrivalled knowledge of the Arab” (Geographical Journal, LV, 4, April, 1920, p. 316). More recently he has been described as "an astute observer of all he saw … able to gather together a considerable mass of information about the people, their industries and agriculture, architecture and social conditions" (Brian Marshall, "European Travellers in Oman and Southeast Arabia 1792-1950", in New Arabian Studies 2 [1994], p. 32). 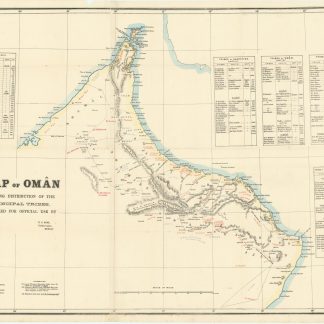