A near-contemporary manuscript translation into Spanish of Paolo Giovio's famous "Commentario de le cose de' Turchi" (Rome, 1531). A Spanish edition was printed in Barcelona in 1543 as "Commentario de las cosas de los Turcos", but the textual variations in this manuscript confirm that this is an entirely different translation based on the Italian first edition, most likely predating the Spanish one, as it does not include later additions to the Italian text.

The historian and physician Paolo Giovio (1483-1552), Bishop of Nocera, wrote and dedicated this commentary to Emperor Charles V, with the aim of supporting a crusade against the Ottoman Turks and assisting the Emperor in understanding the nature and strength of his adversary. The annihilation of the French and Hungarian forces at the Battle of Mohács by the army of Suleiman the Magnificent on 29 August 1526 and the near success of the Ottoman siege of Vienna in 1529 as well as the constant and aggressive privateering activities of the Barbary states in the Mediterranean had highlighted the danger posed to Christendom by the Ottoman Empire and set in motion a Christian counterattack with Charles V as Holy Roman Emperor and the most powerful monarch in Europe as its figurehead.

"Of the various treatises written for Charles V on the Turkish menace, Giovio's was probably the most realistic, the least moralizing, and the most informative. Recalling the emperor's difficulties with Latin, he made his offering in simple Italian. The text was economical. As the Ferrarese envoy remarked, by reading it, 'Your Excellency will learn in a short time what he would not perhaps learn even in a very long time without the book.' Despite his love for the paladins of romance, Giovio regarded this crusade as a practical matter. He understood the Ottoman expansionist drive better than most, and he had a new appreciation of the impact of oriental events on Western history. His objectivity as an historian and his openness to divergent human values enabled him to discern the real strengths of the Turkish state and to present them in full relief. He even took a kind of ironic satisfaction in holding up instances of honorable behavior on the part of 'barbarians' as a reproach to Christian commanders and princes. An enemy who was steady, honorable, magnanimous, disciplined, and valiant was much more to be feared than the degenerate barbarians of popular imagination. So unprejudiced was Giovio in assessing the strengths of the Turks that he often had to defend himself against the accusations of contemporaries such as Jiminez de Quesada that he was 'aficionado a la nación turquesa'" (Zimmerman, Paolo Giovio: The historian and the crisis of 16th century Italy [1995], pp. 121f.).

Provenance: from the extensive manuscript library of Augustus Frederick, the Duke of Sussex (1773-1843), the 6th son of George III, with his bookplate on the front pastedown and shelfmark on a paper label at foot of spine. The ms. is not included, however, in the sales catalogue of his library, "Bibliotheca Sussexiana: The extensive and valuable library of His Royal Highness the Late Duke of Sussex" (3 vols., London, 1827-39).

This manuscript copy, perhaps illustrating the continuing value of Giovio's writing, includes a passport, loosely inserted, issued by Diego Dávila Mesía y Guzmán, marqués de Leganés, for Carlos Ruzzini to travel through the Duchy of Savoy en route to Madrid as Venetian ambassador to Spain in 1691. Thereafter, Ruzzini was, from August 1705 to September 1706, ambassador to the Turkish Court for the celebrations of the accession to the throne of Sultan Ahmed III. He represented Venice in the negotiations that led to the 1718 Treaty of Passarowitz between the Sultan, the Holy Roman Empire, and Venice, and he was sent to Istanbul once more from May 1719 to October 1720 for the ratification of the treaty before later being elected Doge of Venice for the last three years of his life. His account, the "Relatione del Congresso di Carloviz e dell'Ambasciata di Vienna di Sr. Carlo Ruzzini Cavr." published in the Fontes Rerum Austriacarum (Vol. 27, pp. 345-444), is one of the most valuable sources for Venetian-Ottoman relations at the beginning of the 18th century. The inclusion of the passport with this manuscript suggests that the manuscript might have been owned or used by Ruzzini to inform himself on Ottoman affairs in anticipation of his dealings with the Ottoman Court before the manuscript subsequently joined the collection of the Duke of Sussex. 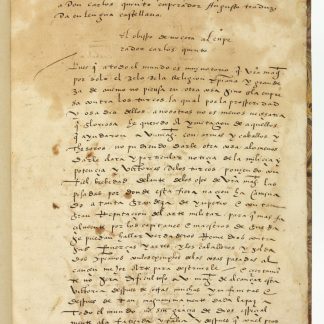