Nihat Bey, Mehmet. [The Ottoman Empire and the Balkan Wars].

A rare and substantial set of military maps of the Balkan Wars, issued as rear-pocket matter to accompany the three-volume work "1328-29 Balkan Harbi, Trakya Seferi" (1924-28) by the topographer and military historian Nihat Bey. Never seen at auction; merely three copies could be traced in libraries worldwide (Istanbul, Princeton, and Washington). The maps show the Ottoman military campaigns on the Balkan peninsula against Bulgaria, Serbia, Greece, and Montenegro in 1912 and 1913, wars which resulted in the Ottoman Empire losing the bulk of its European territory.

Nihad Bey (1886-1928) of Bursa held the rank of Lieutenant Colonel but is remembered as a scholar rather than a soldier. The first and foremost military historian of the Turkish Republic, he published no fewer than 39 books in which he meticulously evaluated operational mistakes and emphasized lessons to be learned from past wars.

Includes a set of manuscript notes in pencil, presumably taken by one of Nihat Bey's students at the military academy in the course of lectures on early 20th century Ottoman military history. Bey probably incorporated the maps in his lectures, as is suggested by marks and notes found on several map sheets, mostly in blue or red crayon, corresponding to the colours and patterns used in printing eight of the maps.

Small tears and holes to several maps, mostly along the folds. The manuscript notes show traces of stapling. An unusual and important specimen of Turkish military history. 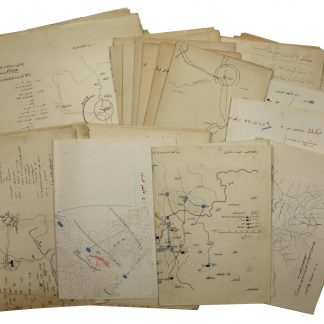