No improved light bulb in sight: "Edison's remains the best"

In German, to the Hamburg merchant Gustav W. Tietgens (1839-1910), who had probed an American interest in a patent for a light bulb developed by the Hamburg inventor C. H. R. Müller, featuring a coiled carbon filament: "I received your very kind letter dated Dec. 21st, regarding the matter of the light bulbs, a little while ago. As soon as was possible I contacted the relevant people, and I regret having to say that I see no prospects for the proposed sale of the patent. As you will remember, Mr. C. Volbehr wrote to you that Müller's product is in fact quite good, but Edison's old lamp remains the best. Edison has a large lamp factory here which dominates the market, and of course he will not be buying any patents he does not need [...]".

The Carl Volbehr (1838-1909) mentioned by Schurz was director of the Hamburg gasworks and head of the city's lighting department. In 1882 Hamburg had been the first city in Germany to authorize the introduction of electric street lights.

Schurz had emigrated to the U.S. after the failed German revolution of 1848 and became a prominent member of the new Republican Party. After serving as a Union general in the Civil War, he represented Missouri in the Senate and was the 13th U.S. Secretary of the Interior from 1877 to 1881.

A few notes in pencil and blue crayon by the recipient. Traces of old horizontal folds; perfectly preserved. 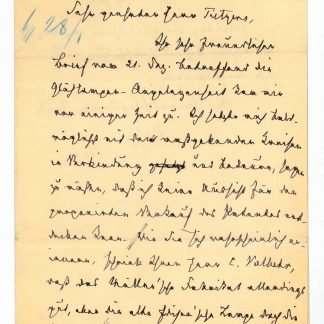