First French edition of this uncommon travelogue, containing a valuable account of the Arabian Gulf including the present-day Emirates, Oman etc. The book discusses at some length the "pirates Joasmis de Rass-al-Kymer" (the Al-Qasimi family of Ras al-Khaimah) and the British raid of 1809, but also the Wahhabis, pearl fishing in Bahrein, and "Fata Morgana"-type mirages in the desert. "An interesting work, rich in topographical observations. Heude's journey took him to Muscat, Ormuz, Baghdad, Bahrein and Nineveh" (Atabey). "The author of this rare and interesting work was attached to the Madras Military Establishment and was apparently related to Earl Fitzwilliam, to whom the work is dedicated. Heude left Bombay in 1816 and arrived in Constantinople the following year. There are descriptions of Arabia, Baghdad and Armenia and of a hazardous journey through the mountains of Kurdistan" (Blackmer). As is typical for British Romantic travel writing, Heude appreciatively describes Bedu life and the various religious sects he encounters.

The plates show local costumes, including those of the Bedouin Arabs and of a Dervish of Basra. The large map shows the Middle East from the Dardanelles and Asia Minor to Kuwait and Bushehr. Light brownstaining near beginning and end with more noticeable gluestaining to endpapers. A prettily preserved volume. 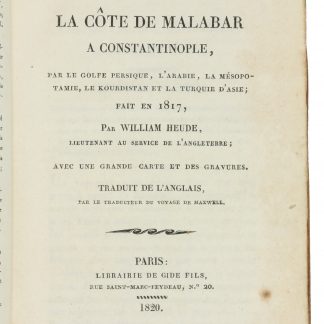