Very rare first edition. "One of the earliest collections of alchemical writers, containing 53 texts [...] A very important item" (Duveen). Among the authors of these treatises highly sought after by 16th century disciples of the hermetic sciences are Geber (Jabir ibn Hayyan), Avicenna, Roger Bacon, Arnaldus de Villanova, Albertus Magnus, Ramon Llull, Johannes de Rupescissa, Richardus Anglicus, Robertus Tauladanus, Giovanni Battista da Monte, Aristotle, Giovanni Braccesco, and Giovanni Aurelio Augurelli, as well as the editor himself. Grataroli (1510-68), a native of Bergamo, studied philosophy and medicine at Padua and lectured on Avicenna from 1537 to 1539. After his conversion to Calvinism he had to flee the Inquisition. He arrived in Basel in 1552, where he practiced and taught medicine and wrote and edited works on medicine and alchemy, of which this is his most famous effort. He also briefly held the chair of medicine at Marburg.

A substantial part of the first section is devoted to the works of the great Arab alchemist Abu Musa Jabir ibn Hayyan, known as Geber in the Latin tradition. Jabir, who was active at the court of Caliph Harun al-Rashid, was inspired to study alchemy by his master Ja'far al-Sadiq, one of the greatest authorities on the esoteric sciences. One of Jabir's most famous works is the "Kitab al-Zuhra" ("Book of Venus", or the Noble Art of Alchemy) written for Harun al-Rashid. His works are commented on by Braccesco, like Grataroli a Lombard, in his "Dialogus ... cui titulus est Lignum vitae", and by the French alchemist Tauladanus in his "In eundem Braceschum Gebri interpretem, animadversio", presented here in their only edition.

The second part contains four texts attributed to Arnaud de Villeneuve, whose "Practica ad quendam Papam" is published here for the first time. This is followed by several apocryphal treatises attributed to Albert the Great, to Raymond Llull, to Avicenna and to Aristotle. Of these, the most notable are the first edition of one of the most important texts of early alchemy, the "De perfecto magisterio" of Pseudo-Aristotle, and the first edition of Johannes de Rupescissa's "Liber lucis", as well as several medieval texts attributed to the monk Ferrarius or Efferarius, most importantly his "Thesaurus philosophiae".

Cat. no.: 12 Catalogue: A Selection of 20 Books and Manuscripts on the Art of Alchemy Tags: Alchemy, Arcana, Early printing to 1600, Islamic World, Medicine 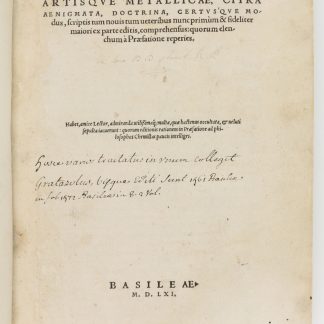