Extremely rare sole edition of these definitive statements on slavery by both Fourier and his disciple, the Guadeloupe-born créole lawyer Charles Dain. Both Fourier’s article (“Remède aux Divers Esclavages”, pp. 43-54) and Dain’s “De l’Abolition de l’Esclavage” had also appeared in the impossibly rare "Première Serie" of the journal La Phalange (1836-40). Giving up his legal career in Paris, Dain (1812-72) turned to Fourier and the proto-Communists and was elected Representative for Guadeloupe by the newly-emancipated slaves there in 1848.

“Charles Fourier denounced British apprenticeship [an intermediate solution for emancipated slaves] and the compensation for slave owners embedded in the parliamentary emancipation bill of 1833: ‘And the fruit of this gigantic donation? Nothing other than a vicious circle, as we see in England, where […] one finds […] legions of poor, both theoretical and real” (Jennings, French Anti-Slavery, p. 44). “As far as the indemnity was concerned, Fourier opposed the need for it from the very first words of his [Remède aux Divers Esclavages]. He believed it was madness to spend millions on freeing the slaves, as the English government had done and as the anglophiles among the French advocated […] On the other hand, for Fourier, slavery was the same kind of problem as poverty […] The cause was the excessive fragmentation of landholdings which prevented small landowners from supporting the costs needed to work the land productively” (Simona Pisanelli, Economic Thought and Institutional Change in France, p. 69).

Fourier (1772-1837) and Dain thus believed in a ‘gradualistic’ approach to emancipation and considered slavery as just one of many ‘servitudes’ inflicted upon humanity by corrupt and immoral social strictures. Here, Dain comments that “what we especially call slavery is only the culminating and pivotal point where all of the suffering of society comes together”. These concepts ultimately made their way to America, influencing Albert Brisbane and the American Associationists (cf. Guarnerip, The Utopian Alternative: Fourierism in 19th-Century America, pp. 252f.).

OCLC shows just a handful of copies worldwide, including just one in the US – at the George Washington University Law Library (an apparently physical copy noted on OCLC with 26 holdings is in fact a digital reproduction). As noted above, examples of the Première Serie of La Phalange (1836-40) are of the utmost rarity (we can find no copies in auction records of the last 50 years).

Traces of old block-stitching in the gutter; pages clean and fresh. A good copy. 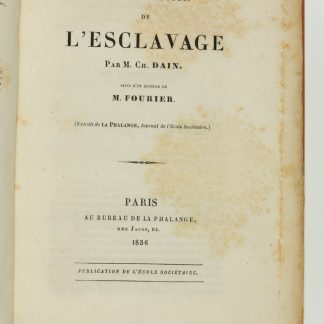