A highly important ensemble of books on early Islamic medicine and science, assembled by one of the most renowned medical research institutes of its age, comprising not only rare historical and bibliographical studies, but also many first printed editions of crucial scientific texts in Arabic, frequently in the form of doctoral theses that remain almost impossible to find in libraries. Several titles, such as Steinschneider's "Introduction to the Arabic Literature of the Jews" (published in no more than 20 copies, "for private circulation" only), have not been seen on the market in decades, making the present offering a unique opportunity to acquire some of the most elusive relevant literature published in the late 19th and early 20th century.

Established in 1906, the Karl Sudhoff Institute in Leipzig was the first institute for the study of the history of medicine established worldwide. Its founder Karl Sudhoff (1853-1938) is regarded as one of the 20th century's foremost historians of medicine. A practicing physician for most of his life, Sudhoff published more than four hundred articles as well as many monographs, edited standard works and editions of original manuscripts. He was personally involved in building the institute's library and thus in assembling the present collection.

The 88 volumes offered here include numerous relevant issues of scholarly journals as well as journal articles. They often unite within a single volume several items published separately but forming a clear thematic unit, sometimes bringing together between two covers material that appeared at various times and in several places but was intended by the author to be considered as a whole. Deaccessioned from the Department of the History of Medicine of the University of Leipzig, most books bear the usual shelfmarks and stamps, but are otherwise in fine condition. 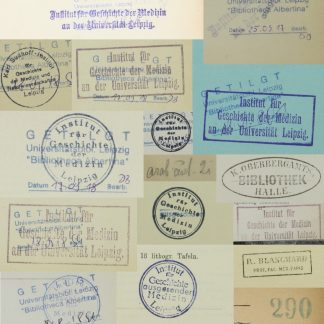