A rare and early letter by Jenner relating to vaccination. Probably written to Edward Beeston Long (1763-1825) of Hampton Lodge, Surrey, only five years after Jenner's first successful vaccination: "Dr Jenner presents his Compliments to Mr Long & is sorry it is not in his power to send him today any vaccine Virus he can depend upon; but Mr Long may be assured of its being sent as soon as possible. Dr J. is happy to find his little Patient has gone thro the Cowpox so pleasantly". Endorsed on verso by the recipient and dated 1801.

After investigations into the protective power of cowpox against smallpox, then a scourge devastating all ranks of society, Jenner carried out the first successful vaccination, on a boy of eight, in May 1796. Eighteen months later he published "An Inquiry Into the Cause and Effects of the Variolae Vaccinae" (1798), one of the most important medical texts ever written, which led to the saving of innumerable lives. After initial skepticism on the part of both the medical profession and the public, the benefits of vaccination were very quickly accepted throughout the civilised world. Jenner's work remains "the basis of the modern science of immunology. When Pasteur successfully inoculated sheep against anthrax he called such preventive inoculations 'vaccinations' in honour or Jenner, a name which has been kept for the successful Salk and Sabin vaccines against poliomyelitis. Jenner had started one of the greatest practical advances in preventive medicine" (PMM 250). Indeed, he became so famous that the Tsar and the King of Prussia asked to meet him when they visited England in 1814. His kindly nature was not in any way affected by his celebrity: Dibdin says in his "Reminiscences" that he "never knew a man of a simpler mind or of a warmer heart, than Dr. Jenner" (p. 199). 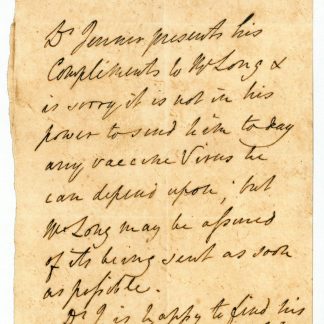