Hitherto unknown letter in Italian to the Venetian consul resident in Alexandria, Biagio Dolfin, reporting on the situation of the spice and wine trade. Part of the correspondence between two influential Venetian merchants and trade officials in Egypt, this letter is an illuminating document of the vast Venetian trading network and of the intricacies of trade between the Islamic and Christian worlds. It also highlights the importance of Mecca in the pepper trade via the red sea: "2[mil]a sarano alla Mecha oltra le altre cosse ai tempi scuto fera manda dalla Mecha alla zornada satende ritorno di messo [...]". While spice imports via Mecca and Baghdad (curiously here called Babylon) went ahead more or less according to schedule, the Venetian wine exports to Egypt met greater challenges. Michiel relays a conversation with the nâz'ir al-khâs's (the Sultan's private treasurer) concerning a wine consignment that had been confiscated by Mamluk authorities in the port of Damietta: "I have been in touch with Nadrachas, complaining of what was done at Damietta. He answered me that he was sorry, but nothing can be discussed about wines anywhere. And note this: I replied, there are no wines, but there are things to eat. He said if they belonged to Venetians, he would look after them" (transl.).

The official prohibition on any discussion of the incident and Michiel's attempt to declare the shipment as foodstuff speaks of the criticality of the matter. Wine was tolerated in trade cities like Alexandria but was strictly outlawed in Cairo and other places of worship. The Venetians were permitted to import food and wine free of duty for private use, but as they "imported so much wine that they could hardly declare it to be for their own consumption" and the business was lucrative, problems frequently arose (Christ, p. 169). Since the taxation and regulation of wine imports could not be handled officially due to religious interdictions, the fate of the cargo remains open. The wine might have been poured away so as to suppress illegal trade, embezzled, or even discreetly returned to the Venetians.

The Patrician Angelo Michiel was one of the most senior and important merchants in Alexandria, presiding over the "Council of Twelve" governing the Venetian community in the city. In the summer of 1419 he was officially tasked with a mission to Cairo to gather information regarding the spice trade on behalf of the newly appointed consul Biagio Dolfin (ca. 1370-1420). This intelligence was crucial for the delicate timing of the Venetian imports via the port of Alexandria every autumn. A vast correspondence of at least 31 letters exchanged between 9 August and 26 September 1419 could be reconstructed from the few surviving letters and receipts. The letter at hand, mentioned in a letter from 15 September, adds to only six other preserved letters from the correspondence and has never been published (Christ, pp. 300).

Traces of folds, some browning, stained on the lower right. Three minor and one deeper tear (touching the text) on the lower border. Transcribed in full with English translation. 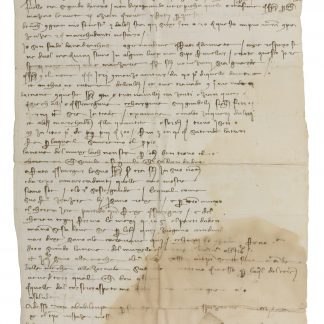