Introducing radioactivity to a young audience: microscopic mosquitos in the nave of a cathedral

Oblong 4to. 3 pp. With autograph sleeve.

In French, containing cues for an introductory lecture on the scientific history of phosphorescence, electromagnetic radiation, and radioactivity held at the museum of the military academy of Saint-Cyr. In his opening remarks Becquerel draws a connection between museums and the research on phosphorescence, also mentioning his father Edmond, who had been a professor at the National Museum of Natural History in Paris. He stresses the importance of the history of ideas in the natural sciences: "There are some phenomenona that seem traditionally to be researched at museums. Phosphorescence is one of them. [Charles François de Cisternay] Du Fay worked on it in 1724. 50 years ago, my father started a series of research projects that have not been interrupted since. If I introduce you to some of these old experiments today it is because the ideas that they brought forward will lead us to the most recent discoveries." Following this historic approach, Becquerel mentions the first description of phosphorescence in 1602, du Fay's experiments with electric charges, the invention of the Crookes tube around 1870 which made Wilhelm Röntgen's discovery of X-rays in 1895 possible, the discovery of polonium and radium by his student Marie Curie and her husband Pierre in 1898, the differentiation of alpha, beta, and gamma rays by Ernest Rutherford between 1899 and 1903, and a variety of other important scientific contributions. Although the cues include a few diagrams and formulae, Becquerel's aim was clearly propaedeutic with a lecture tailored to a young audience. In his closing statement, he offers two vivid metaphors of the recently discovered electron: "Within an atom the electrons are as distant as the planets in the solar system. An electron is much smaller than a microscopic mosquito flying in the nave of a cathedral." - Lightly folded, in very good condition. 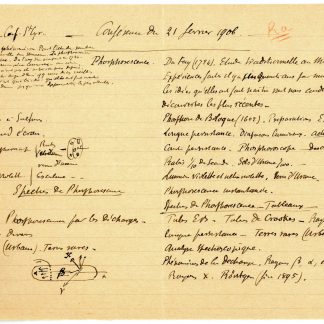