Archive of books and documents on the Dhofar rebellion

Comprising a total of ca. 250 items, including printed books, journals, various typescript and manuscript documents, photographs, a poster, and a music record, catalogued in 43 lots as prearranged in folders by the collector himself. In Arabic, English, French, German, Danish and Italian.

An extraordinary archive of books and documents on the Dhofar rebellion (also known as the Omani Civil War) waged from 1962 to 1976, from the collection of the journalist and activist Luc-Daniel Dupire, founder of the Brussels Palestine Committee in 1969 and chairman of the Palestine National Committee in Belgium from 1970 to 1976.

Mostly issued by the People's Front for the Liberation of Oman and the Arabian Gulf (PFLOAG, later PFLO), the material spans more than a decade, from 1969 to the early 1980s, the bulk dating from the mid-1970s. The political and historical studies found in this collection, issued by the PFLOAG itself or their international support committees, not only provide the necessary background to an appreciation of the Omani war but reflect on the Arabian Gulf region as a whole.

An intriguing critical study of the situation of political prisoners in Oman, Bahrein, Iran, and Saudi Arabia, based on individual cases, is present here in the English first edition as well as in German and Danish translations. Another publication that treats the political and socio-economic situation beyond the borders of Oman is a study of the oil states or "petrocrats", "Les Émirats mirages" by Gabriel Dardaut and Simonne and Jean Lacouture: it mentions Sharjah and Sheikh Sultan, the "most hospitable one of the kings of the Gulf", Qatar and the authors' arrival at Doha, as well as Bahrein, the "green bouquet floating on a green sea".

Many items contained in this archive are unique in their comprehensiveness and would be well-nigh unobtainable individually. We here mention only the substantial ensembles collected by the delegation of the Belgian Palestine National Committee at the First and Second Conference of the Solidarity Committee for the Revolution in Oman and the Arabian Gulf in 1973 and 1974, mostly comprising activity reports and the committees' political statements, as well as the no fewer than 58 issues of the PFLOAG news bulletin, "Saut al Thawrah", in its English and Arabic versions. Additionally, there is a 52-item corpus of documents by the Organization of Yemeni Revolutionary Resisters (OYRR) in English and Arabic, including reports by the military command.

The manuscript documents, including the draft of an interview with Fred Halliday, a specialist on the Middle East and international relations, given to the Belgian Palestine Committee, are unique survivals. Equally impressive is a press kit for Heiny Srour’s 1974 film "La Révolution a sonné", the only film ever shot in the Dhofar liberated zone, as well as several lists of medications and equipment required by the Omani Red Crescent.

The present collection bears impressive testimony to the impact the war in Oman had on an international level, triggering the establishment of support committees in Belgium, France, Germany, Great Britain, Denmark, Sweden, Italy, the United States, and the Soviet Union, many of their critical publications, reports, and pamphlets having survived in this ensemble. It is topped off by a 1972 music record of revolutionary songs, published by the French "Comité de Soutien à la Révolution en Oman", as well as 39 large-scale photographs, providing first-hand testimony on the fate of the Omani people, as well as Sultan Qaboos's visits to foreign political leaders. The material here offered constitutes a singular opportunity to acquire a vast and thematically wide-randing trove that documents one of the darkest periods of contemporary Omani history. 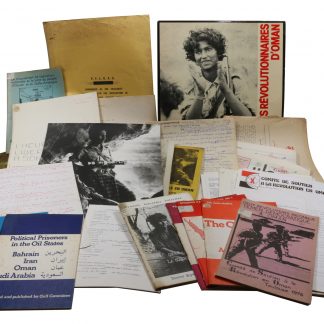