Important letter in French to the painter Émile Bernard (1868-1941) announcing his plan to move to Madagascar so as to found a "workshop of the tropics" where fellow artists could join him: "Irrevocably I will go to Madagascar - I will buy a clay house in the country that I will enlarge myself, grow plants and lead a simple life [...] Then I will found the workshop of the tropics - whoever wishes can come there to meet me." Always short of money, Gauguin hopes to finance his move with the expected revenues from a pending art deal with the collector Charles Charlopin: "Now there is a silver lining on the horizon, dissipating the accumulated mists. I am on the verge of selling several paintings for 5000f independent of Goupil, very cheap of course. The buyer is all right but he will only get his money in a month. I will not believe it until I have the money in my pocket." In preparation for his relocation he obtained information from Odilon Redon's wife Camille who grew up in La Réunion and knew Madagascar: "She told me that you can live there for 30 years with 5000f if you want to. The cost of living is practically nil for those who wish to live like the inhabitants. By hunting alone you can easily find food etc... Therefore I will, once my deal is closed, start what I am talking about and live freely and make art." - Commenting on Bernard's dissatisfaction with his job as an industrial designer, Gauguin prompts his friend to join him as soon as possible: "With all my heart I address the sufferer, the artist who cannot practice his art here in Europe [...], come and find me - you will find, without money, the safe existence in a better world." Gauguin presents his invitation as an act of charity: "If you are unhappy, I cannot give you any consolation other than this - Half of my coat - That's still the best way to be Christian [...]".

Malingue dates the letter to April 1890, which is in agreement with the references to Émile Bernard's brief career as an industrial designer (late 1889 to July 1890) and Gauguin's announcement to leave for Le Pouldu, Brittany, in the short postscript (Malingue CII, 182f.). The letter at hand is very similar in content to a letter written to Vincent van Gogh from 13 June 1890 (Jansen et al., 884). On 17 June 1890 van Gogh wrote his brother Theo that although he considers Gauguin's plan unrealistic in the extreme, he would like to join him in Madagascar (ibid., 889). Later that month Gauguin began to consider Tahiti as an alternative while still pondering at least until July (Malingue CVII and CIX). After dragging on for months, the deal with Charlopin eventually fell through and Gauguin could only gather enough capital for his voyage through an auction in early 1891. When he finally set sail for Tahiti on 1 April 1891, his friendship with Émile Bernard was over and Vincent van Gogh had commited suicide.

Folded. With occasional brownstains, a deep fold tear and a collector's note "Paris, 1890" in pencil and ink. 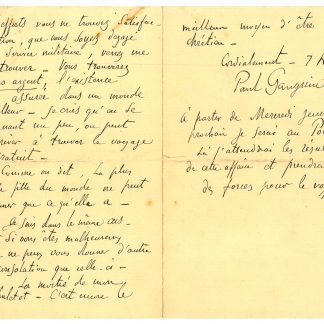