Forerunner of Computer Science: author's presentation copy to the Superior General of the Jesuit Society

Folio (46 x 30 cm). 2 vols. in 1. (18), 245, (2), 247-482, (10) pp. With 2 richly engraved allegorical frontispieces, an engraved plate with a full-page portrait of Emperor Leopold I, an engraved plate showing all knowledge of the universe organised as a tree, 2 engraved volvelles (with 4 rotating dials), 20 further engravings on integral leaves and a couple dozen woodcut figures in the text. Contemporary richly gold-tooled red goatskin morocco decorated a petit fers, gold-tooled turn-ins, board edges and raised bands, giving a total of more than 1500 impressions of about 14 stamps and 3 rolls, edges gilt over red and blue squiggles. Janssonius van Waesberge, who published Kircher's books in Amsterdam from 1664/65 to 1682, arranged to have copies of several luxuriously bound for Kircher to present to leading figures, and this is almost certainly one of them, presented to Giovanni Paolo Oliva, Superior General of the Jesuit Society.

First and only edition of this work important for the theory of science. Its fundamental idea of connecting all branches of science in a common system is based upon the thoughts of Ramon Llull. "Represents the 17th century research for a universal language" (Merill) and is considered a "fascinating anticipation and precursor of computer science" for its treatment of the art of combinatorics. At the same time, it forms a manual of mnemotechnics and of a method of learning.

On 29 July 1661 Kircher contracted to have the Amsterdam bookseller Johannes Janssonius van Waesberge (1616-81) publish his books, including new editions of some previously published works as well as works not yet written. Kircher also had Van Waesberghe arrange for some copies of the books to be luxuriously bound for presentation to various luminaries.

No expense was spared to produce the present binding, and it bears the owner's inscription of Giovanni Paolo Oliva (1600-81), Superior General of the Jesuit Society, who granted the privileges for both volumes - an obvious candidate for a presentation copy. Moreover, the binding is nearly identical to that of the Morgan Library's copy of the same edition, using the same tools in a nearly identical arrangement: thus, a single binder made at least two virtually identical and extremely luxurious bindings for the same edition, a fact which strongly supports the notion that they were made as Kircher's presentation copies.

In a 1948 Sotheby’s catalogue, Anthony Hobson attributes the binding of the copy now at the Morgan to the most famous Dutch binder of all time, Albert(us) Magnus (1642-89). Miner merely notes this attribution and the Morgan still attributes it to Magnus, but Nixon, discussing other Kircher books bound by Magnus, writes "I am less certain that ... the Ars magna sciendi in the Landau-Finaly sale ... does come from the same workshop". Similarly, De la Fontaine Verwey calls the attribution to Magnus "doubtful", and Foot writes that the binding "is decorated ... with closely massed tools, which I have not found on any other Dutch binding of the period". High-quality Dutch bindings in richly gold-tooled morocco from the 1660s to the 1690s were once almost invariably attributed to Magnus, but Foot distinguishes about a dozen different Dutch workshops that finished bindings in this style, noting that some "show the same high level of craftsmanship and are decorated with tools very closely similar to those used by" Magnus. The fact that few of these groups of bindings have so far been linked to named bookbinders takes nothing away from the quality of the work. The present binding represents a workshop of the highest order that has so far been barely studied, and its large number of tools, with more than 1500 impressions of about 14 stamps and 3 rolls, gives a good overview of the workshop’s equipment. The paper is of royal format, probably indicating a large-paper copy, since many copies seem to be 37 to 40 cm tall.

With the contemporary owner’s inscription of Giovanni Paolo Oliva at the foot of the title-page and the armorial bookplate of the Bibliotheca Philosophica Hermetica in Amsterdam. Browned and foxed as common, a few leaves more severely, with the ink of both the letterpress text and the engravings sometimes leaving a browned offset or showing through on the reverse, but otherwise in good condition. The foot of the spine has a crack in the front hinge and a few wormholes and repaired tears in the backstrip (all within the lowest 4 cm); the head of the spine also shows a few wormholes but only minor damage. The turn-ins have browned the outer edges of the marbled pastedowns, and the free endleaves are more severely browned than the leaves of the book itself. The binding is otherwise in very good condition, with only minor scuff marks around the extremities and with nearly all of the tooling clear and well-preserved. 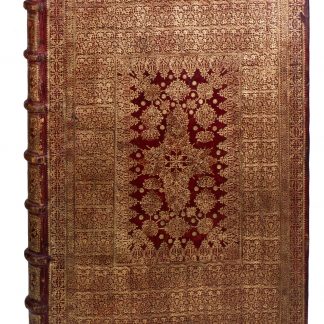