The only substantial work on Fra Mauro's famous world map

The first substantial study and reproduction of Fra Mauro's famous mappa mundi, considered the supreme medieval map of the world and the "greatest memorial of medieval cartography" (Almagià). The most detailed representation of the world ever seen when it was produced around 1450, it remains one of the most important works in the history of cartography, marking the new embrace of scientific method which placed accuracy ahead of religious or traditional beliefs. Strikingly, it is oriented with south at the top, recalling the Arab tradition and more specifically al-Idrisi's famous 12th century world map, copies of which Fra Mauro may have known. Europe is shown at the bottom, with Arabia (not Jerusalem) at the centre and America as yet missing. Fra Mauro incorporated "the discoveries of Marco Polo and the Portuguese", also showing "many countries later known, which the learned monk doubtless shaped after ideas gathered from the oral narratives of occasional travellers" (Müller). He was able, by personal intercourse, to gather additional information from Nicolo de' Conti, who had returned from the east in 1440, and his work is also of special interest for showing that, at least forty years before the Portuguese reached India, Arab sailing directions covering the east coast of Africa, India, and the seas beyond to the vicinity of Sumatra, were available in western Europe.

Placido Zurla's handsome work, the earliest study of the map, was the first to include a reproduction of it in book form. Zurla (1769-1834) had unique insight into Mauro's monumental achievement, as he served as librarian to the same Camaldolese order as the geographer and so had access to the original map itself.

Occasional foxing, mainly confined to margins, a little stronger in the title-page. An untrimmed, wide-margined copy preserving the deckle edges; the folding map reproduction in loosely inserted in a custom-made lower cover pouch. 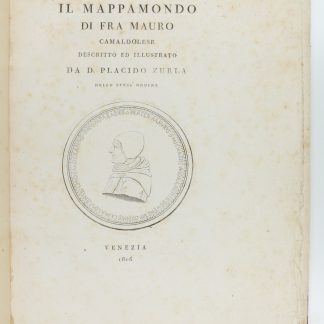