Elaborate album of lithographs based on drawings by Vice Admiral François-Edmond Pâris from a visit to the holy city in 1861. The album follows his itinerary as described by Pâris in the introductory text. Leading his squadron from Jaffa to Jerusalem, Pâris drew a charming scene of pilgrims gathering at the fountain of Abu-Nabbut. Before entering the city, he captured an impressive view of Jerusalem from the Mount of Olives. 52 important sights are marked in the uncoloured lithograph and described in the text. The view of the city is followed by impressions of Christian places of worship such as the Holy Grave, the Prison of Christ, and the Chapel of Saint Helena in the Church of the Holy Sepulchre, the Tomb of the Virgin Mary, the Grotto of the Nativity in nearby Bethlehem, and an unusual, uncoloured view of the interior of the Golden Gate (Gate of Mercy). The final three lithographs present two beautiful interiors of the Mosque of Omar and one of the Al-Aqsa Mosque. All sights depicted are described in the text.

François-Edmond Pâris (1806-93) commanded the 2nd Division of the French fleet in the Mediterranean when he visited Jerusalem. Leading primarily scientific missions, Pâris was a talented draughtsman who took an interest in naval architecture, steam engineering, and geography. Today Pâris is considered the father of modern maritime ethnography; he played an important role in the modernisation of the National Maritime Museum in Paris.

Original paper wrapper rather wrinkled with some repaired tears and restored loss to corners. Title-page a little stained; several tears to margins professionally repaired. Lower right corner of the first text-sheet repaired without text loss. Lithographs generally well preserved, but some lightly affected by stains in the margins; occasional tears to the sheets and corners restored, not affecting the illustrations. 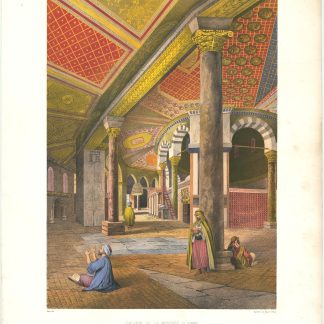