First edition of one of the most important works written and published in French in the 16th century. Incomplete copy of the first part only, lacking the first five leaves as well as the eight leaves comprising the 29 sonnets.

Montaigne's groundbreaking essays on an eclectic array of subjects - from cannibals to solitude, from sleep to sadness - constituted an entirely unique and unprecedented literary genre, and a philosophy of knowledge that was based on his own personal experience and observations, epitomizing 16th century enlightened scepticism. "The most elaborate essay, the 'Apologie de Raimond Sebonde', is second to no other modern writing in attacking fanaticism and pleading for tolerance" (PMM).

The publishing history of this work is complex, both for the rather careless printing of the first edition, and in large part because the changes to the text between editions were considerable: Montaigne's text was by no means static but constantly evolved under the eye of the author who "considered each new edition as the last". This first edition, printed by Millanges in the spring of 1580, is unsophisticated and rather hastily composed, as betrayed by the innumerable misprints, font and type inconsistencies, errors in page numbering and textual variants. This copy has G2 and Aa5 missigned as 2G and A5, while Aa2 is correctly signed thus (not as Aa; see Sayce & Maskell, p. 2), and the corrected states of C8 and O8 (ibid., p. 5, note 7), as well as the letters 'gsit' accidentally printed at the foot of Gg3 (ibid., p. 6, no. 9). The irregular spacing of lines on the page - occasionally very cramped - indicates composition by forme.

Copies of early editions of Montaigne's work are extremely rare. Fewer than 100 examples are estimated to exist in private and institutional collections worldwide, suggested by some to point to a small original print run of only 300 to 400 copies (Bibliotheca Desaniana, no. 8, 2011; Balsamo, p. 160). 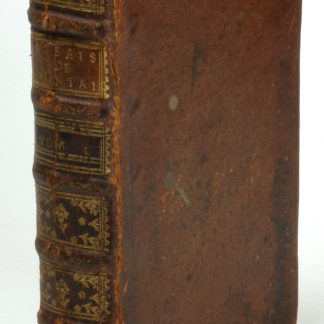