The birth of modern enlightened scepticism

First edition of one of the most important works written and published in French in the 16th century: a highly desirable copy preserved in its original binding, "one of only four or five copies known in a contemporary vellum binding still in private hands" (Sotheby's Paris, 12 Dec. 2019, lot 118). Exceptionally wide-margined and by far the tallest seen on the market for decades. Title-page of part 2 in the rare first state, that of part 1 in the first edition's second state.

Montaigne's groundbreaking essays on an eclectic array of subjects - from cannibals to solitude, from sleep to sadness - constituted an entirely unique and unprecedented literary genre, and a philosophy of knowledge that was based on his own personal experience and observations, epitomizing 16th century enlightened scepticism. "The most elaborate essay, the 'Apologie de Raimond Sebonde', is second to no other modern writing in attacking fanaticism and pleading for tolerance" (PMM).

The publishing history of this work is complex, both for the rather careless printing of the first edition, and in large part because the changes to the text between editions were considerable: Montaigne's text was by no means static but constantly evolved under the eye of the author who "considered each new edition as the last". This first edition was printed by Millanges in the spring of 1580. It is unsophisticated and rather hastily composed, as betrayed by the innumerable misprints, font and type inconsistencies, errors in page numbering and textual variants. Indeed, "the pagination of vol. ii is very irregular with so many variants that it is impossible to reconstruct an ideal pagination. Probably no two copies are the same" (Sayce & Maskell, p. 4). The first part of this copy has G2 and 2A5 missigned as 2G and A5, while 2A2 is correctly signed as Aa2 (not as Aa; see Sayce & Maskell, p. 2), and the corrected states of C8 and O8 (ibid., p. 5, note 7), as well as the letters 'gsit' accidentally printed at the foot of Gg3 (ibid., p. 6, no. 9). The irregular spacing of lines on the page - occasionally very cramped - indicates composition by forme. The second-state title-page of part 1 has an arabesque ornament rather than Millanges' device, and Montaigne's noble title - 'Messire' - and functions, in contrast to the rarer first state, seen here before part 2, which provides only the title of the work and the author's name without any of his designations.

Copies of early editions of Montaigne's work are extremely rare. Fewer than 100 examples are estimated to exist in private and institutional collections worldwide, suggested by some to point to a small original print run of only 300 to 400 copies (Bibliotheca Desaniana, no. 8, 2011; Balsamo, p. 160).

Lacks 3S1 and 8. The latter leaf, containing the end of the errata, is printed on the recto only; "l'un de ces deux feuillets manque souvent" (Sotheby's Paris, 27 Nov. 2003: EUR 337,875). The first five leaves and the sonnets of La Boétie have been professionally and imperceptibly remargined. Altogether a fine, uncommonly wide-margined specimen in contemporary vellum. Of the sixteen copies seen on the market since 1970 (according to Rare Book Hub), this is by far the tallest, surpassing the widest-margined exemplar previously traceable, which also commanded the highest result of all auctioned copies (Christie's Paris, 25 June 2009: EUR 715,000 before premium). 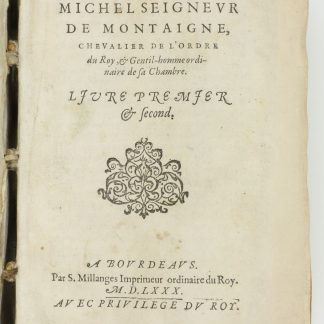