Two of the Earliest Works from the Press of the Swedenborgian Society, both Extremely Rare

London, Philanthropic Society and sold for the Editor by the Society for Printing and Publishing the Writings of the Honourable Emanuel Swedenborg, 1810-1811.

Two very rare Swedenborgian imprints, prepared and published at the expense of the industrialist John Augustus Tulk (cf Hyde), and some of the earliest books to issue from the press of the newly-formed ‘London Society for Printing and Publishing the Works of Emanuel Swedenborg’. Published at the height of Swedenborg's popularity in England (when the sect counted luminaries such as William Blake among its members), the present indices were designed to aid in the reading of Swedenborg’s monumental multi-volume Arcana Coelestia, finally translated in its entirety into English in 1806. COPAC shows the Index to the Passages of Sacred Scripture at Manchester only; the Index to the Arcana Coelestia is held at Edinburgh, NLS, Glasgow, Chetham’s Library, and Manchester.

Originally published during Swedenborg’s residence in London between 1749 and 1756, the Arcana Coelestia (‘Heavenly Mysteries’) was the mystic’s most comprehensive attempt at a biblical exegesis, covering the whole of Genesis and Exodus. That work also contained numerous personal observations of the Swedenborgian spiritual world, including his experiences of heaven and hell, not to mention the inhabitants of other planets which Swedenborg purported to have met. As a necessary guide to this voluminous work, Swedenborg also prepared an Index to the Heavenly Mysteries (1st ed, Latin 1756) which remained untranslated until the present work.

Tulk’s translations were likely meant to accompany John Clowes’ English translation of the entire Arcana (comprising some 12 volumes), which was finally completed in 1806. J. A. Tulk himself (1756-1845) was one of the founding members of the Swedenborg Society, and its first Chairman. A wealthy industrialist, his son Charles (MP for Sudbury) would introduce Swedenborg’s philosophy to the likes of Samuel Taylor Coleridge and William Blake.

The Swedenborg Society, or ‘London Society for Printing and Publishing the Works of Emanuel Swedenborg’, as it was originally called, was founded on the 26th of February 1810 by figures including Tulk and the famous sculptor John Flaxman. The present works thus represent some of the earliest efforts of this society to translate and propagate the writings of their controversial but increasingly popular religion. 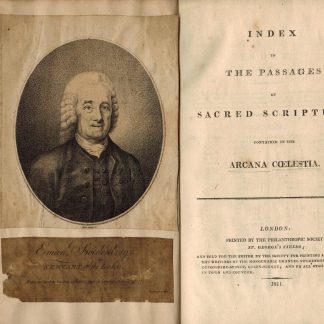 You're viewing: Tulk, John Augustus / Swedenborg, Emmanuel. Index to the Passages of Sacred Scripture contained in the Arcana Coelestia… …London, 1810-1811. € 850.00
Add to cart