4to and 8vo. Together 10½ pp. on 3 bifolia and 8 single sheets. The ALS in pen and pencil. With typescript envelope.

Amicable letters to the French artist and writer Boris Vian (1920-59) about his literary career, from which he struggled to make a living, as well as family affairs and Vian's writing.

Several letters mention a piece on the Maginot Line which Vian was doing for the US magazine "Reporter", where Brossard worked as a journalist: "There is a lot of European stuff they are interested in and maybe you could do it. Namely, they are very interested in seeing a piece on the Maginot Line revisited [...] What is happening with the Line now, are people living in it, has it been dismantled, have the rats taken over, and so on. It would be a semi symbolic visit, as though you were visiting an idea about life you held as a child and found, in the adult world, that is was totally impracticable [...]".

Having left the "Reporter", he refocuses on his novels, expressing confidence that Vian's 1946 crime novel "I Spit on Your Graves" would be a huge success in the U.S.: "Forget the Maginot Line piece. I'm no longer working for the Reporter. Hope the whole thing did not upset you [...] My novel - published about 4 weeks ago - is slowly selling but will not make me any dough. Meanwhile I am trying to write a sexxy little novel under a different name - maybe Vernon Sullivan! - to make some money. My second novel ["The Bold Saboteurs", 1953] is all finished, on it I will stand or fall as a writer up to now [...] would you ask [Raymond] Queneau how he feels about the second novel [...] please send me another copy of I shall spit on your graves [...] I want to turn it over to my agent, who is the best in New York. I am positive it would sell like crazy here [...] My personal life stinks, as usual. But that is my destiny at the moment. My child, however, is very rewarding. A completely adorable beast [...]".

Hoping to score a secure job with the international broadcaster "Voice of America" funded by the U.S. Congress: "I am trying now to get a big job in the government, in the Voice of America. It would pay well, about $10,000 a year, and if they hire me they would want to send me to Europe for a couple of years. I go to Washington D.C. this week to see if my family can pull some wires in the government [and] use some influence on my behalf. It is too hard and too nerve wracking to try to make a full time living as a writer or an editor [...]".

About his financial situation and literary productivity: "I have a new novel coming out in the spring [...] It was just sold to the reprint people [...] for $7500. This is what we're living on. I have begun a third novel, called The Double Dealers [...]" (no such novel was published; Brossard's third novel was titled "All Passion Spent"; his fifth novel is titled "The Double View").

About his family's difficult situation: "Very little new with me worth talking about, lots of minor bad luck - wife broke her ankle, then we found out she was pregnant, so had to have an abortion, which took all the money I had left. Still waiting on a job. Sent Queneau the rest of my second novel, but have not heard from him [...]".

Wondering about Sartre's intentions to publish two works: "The next time you see Queneau would you ask him if Jean Paul Sartre is going to publish those 2 stories [...]". 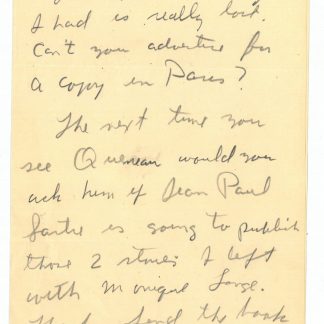