A "blessed victory" for more humanity in times of war

To the politician Ernest Thurtle, acknowledging his success in abolishing the British Army's death penalty to punish crimes such as desertion or cowardice: "Then the Lords gave me a fright. Lord Allenby too, whom I like and admire. Surely if I had been in London, able to see him, he would at least have kept silence - if not supported you. Yet doesn't it make you surer you were right, to see all the General Staff opposing you? In the end you downed the Lords, as you had downed the Government. I feel it is a blessed victory. The old state of law hurt me. It was such a damnable judgement upon our own flesh & blood [...] I haven't really said thank you for all you did: because I feel that it was only your duty really. People who care anything at all about their countries don't like to see them fouling themselves [...]".

After over 300 British soldiers had been executed by firing squad following brief trials during World War I, Thurtle had first introduced his measure for the law's abolition in 1924.

A few small marginal tears to the folds. 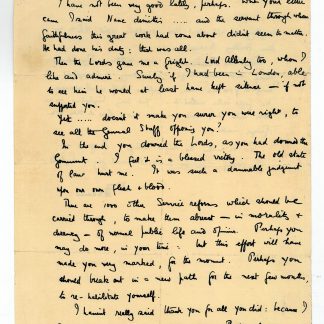