First edition of May's only play: a richly symbolistic example of the author's mature work that focused on pacifism, the raising of humans from evil to good, and the universal "question of mankind". Set in Muslim Mesopotamia, his verse drama shows the transformation of Abu Kital, Sheikh of the An'allah, who is aided by the sheikhs of eight Arabic tribes as well as the colourfully named "Sheikh of the Caravan of Death", from a disciple of cruelty to a man of noble mind.

May was a phenomenonally popular author of travel fiction, often set in the Middle East and the American West, and remains one of the best-selling German writers of all time, with some 200 million copies published. In spite of the high hopes he nourished for it, the play was poorly received by May's readers and turned out to be his greatest disappointment.

Binding slightly stained and dustsoiled. Some foxing and brownstains to interior (more pronounced on flyleaves and pp. 37-41); a very few minor edge flaws (some with early repairs). 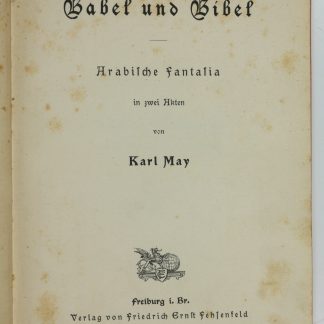