Letter in Russian to Alexej von Jawlensky (1864-1941) concerning the preparation of the exhibition "30 deutsche Maler aus unserer Zeit" which would be held from April to July 1930 at the "Nassauischer Kunstverein" in Wiesbaden.

Kandinsky explains that despite his difficulties in communicating with the Germans, not being German himself, he managed to get Jawlensky to present seven paintings there. He pointed out to him that he should not be disappointed because it was more than for most of the other participants, and asked him not to be angry with him since the decision was not up to him. Kandinsky also writes about the two other members of the exhibition group "The Blue Four", which he founded with Jawlensky in 1924: Paul Klee and Lyonel Feininger.

Left margin with punched holes (no loss to text). 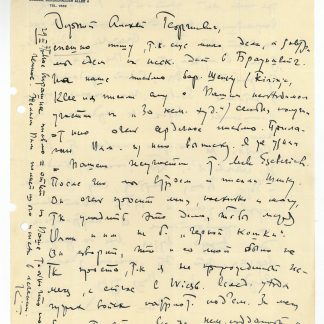