"I am highly highly annoyed and enervated": Matisse and Olga Markowa Meerson

Complex and emotional letter to his wife Amélie Noellie Parayre, primarily describing a mental health crisis of Matisse's student and alleged lover Olga Markowa Meerson. In the first part of the letter, Matisse informs his wife that he had written to his patrons Gertrude and Leo Stein. He emphasizes that he wrote about painting at length but did not mention a potential visit of the siblings in Collioure, the southern French fishing village where Matisse spent the summer of 1911. Apparently, Amélie dreaded their visit and Matisse planned to suggest to the Steins the neighbouring village Argèles as an alternative domicile, but concludes: "Even if they find accommodation here - provided that they bring their housemaid - we cannot give the impression of pushing them away. You will probably see less sympathetic people here because Collioure is said to be invaded by painters" (transl.).

The second part of the letter forms an intimate account of Meerson's mental crisis, Matisse's conflict with his wife over the student, and his as well as his daughter Marguerite's growing desperation that is worth quoting in full: "I do not have anything really new to report except perhaps that it rained all day and that Olga already wanted to leave 3 times since your departure. The nerves recover less and less well, which is very difficult for us. For three days she has been sleeping here, having had hallucinations at her place. I strongly wish her to return to Paris and I hardly see the possibility of taking her to Italy because she could never work to make ends meet and take care of herself. Surely she needs to return to her family, she is really incapable of any effort. I am highly annoyed and enervated - she makes scenes for no reason. Her irritation, which was with Purrmann, has shifted to me, and I assure you that it is not at all amusing and there is nothing to say because she will not acknowledge it. Today she suffered a very strong crisis that destroyed Margot and me. I have been awake since one in the morning and am writing you after writing to Stein. It is now four o'clock. Finally after wanting to leave yesterday at 11 o'clock in the evening, very agitated, as if mad, she decided to stay, but will not see us again. She will make arrangements to stay with Madame Delfau [wife of the painter Louis Delfau] and remain there so as not to disturb us anymore. She has a day or two. You can wait to see her come back after these days but I do not recommend it at all because it will be unnecessary stress for you. We certainly made a mistake in not letting her leave a month ago. She has to return to her family, she admits it herself in her manic phases. To hold her back would be negligent. Besides, there are other things to do, I have not worked in four days. Since Huyot [the painter Albert Huyot] left we have been saddled with her, and it is enervating. The night before this I slept very poorly. This one is sleepless now - you need to choose her or me without even considering Marguerite, who is strongly affected [...]. The sea is certainly harmful to her, and she needs the care that her family has to provide her".

Matisse met the Russian Olga Meerson, a talented painter, at the "Académie Matisse" that he had founded in 1908 with the financial support of the Steins and other friends. The German artist Hans Purrmann, mentioned in the letter, was among the organizers of the short-lived academy. When Matisse stopped teaching in 1911 he continued to meet Meerson, who served him as a model, and they allegedly had an affair. The fact that Meerson in 1911 executed one of the few portraits of Matisse, always a reticent sitter, speaks of their intimacy. While it is often repeated that Matisse broke off contact because of his wife's jealousy, the letter tells a more complex story. We do not know details of the relationship of the two women but Matisse's dramatic demand to choose between him and her clearly points to a very emotional situation. Apparently, Amélie had planned a trip to Italy with Henri and Olga, which he opposed citing Olga's mental health. The relationship of the Matisses with Olga Markowa Meerson effectively ended only weeks after the letter was written. Olga moved back to Munich, where she married the German music critic and composer Heinz Pringsheim (Thomas Mann's brother-in-law) in 1912. In 1929 Olga Markowa Meerson took her own life in Berlin. In spite of her obvious talent, Meerson is today largely forgotten as an artist, which will hopefully change in the future. 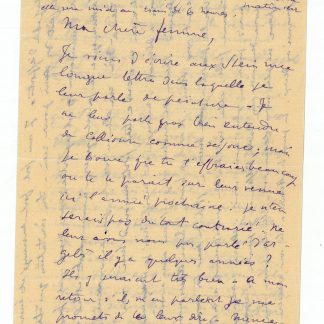