"My mind is frozen as if it was winter": André Gide's correspondance with Édouard Ducoté

Important French correspondence with the publisher and friend Édouard Ducoté revolving around the literary journal L'Ermitage (1896-1906). In what is probably the earliest letter of the collection, Gide announces that Henri Albert would be willing to publish a passage of his latest Nietzsche translation in L'Ermitage. Gide was eager to see the text in the February issue but Charles Chanvin, another editor, had put Albert off: "It would be good if it appeared in February lest it lose its freshness [...] - But Chanvin told him that L'Ermitage probably would not be able to print it before March. Please speak up to inform him [...]". Albert's translation of an unpublished preface to "Human, All Too Human" ultimately appeared in June 1902.

Gide published two articles in the February issue of 1902 but was highly critical of the copy-editing or the lack thereof: "Effectively, coming back here, I found L'Ermitage. It is really irritating that nobody takes care of revising the proofs one last time. My article is full of very deplorable errors: the apostrophes fall randomly and in such a way that one often understands nothing anymore [...] Why is the title not centered? All of this could be ignored in a polemical magazine but L'Ermitage aspires to be something else [...]" (Cuverville, "Mercredi"). Gide even asks whether the composition of the other article is still intact, as he would like for it to be corrected and reprinted. Concerning this article "Les limites de l'art", Gide had hoped that it would "pass unnoticed" so as "not to amuse Bouhélier too much". This alludes to Gide's turbulent relationship to Saint-Georges de Bouhélier and his literary movement "Le naturisme", an antagonistic reaction to symbolism.

The proofreading problem appears to have persisted, for Gide complains about more errors in the March issue. The letter concerning this issue is highly interesting, as Gide talks about a creative blockage and exhaustion: "We're now twelve days in the countryside. The weather is splendid and spring has begun... Much less so in my head. My mind is frozen as if it were winter; not a sentence, not a word stirs. And I feel as if I had written 'The New Christ'. For twenty days now, the proofs of my book are awaiting me; even to correct them is beyond my abilities; I only have some [energy] for sowing my flowers and for putting hay around my roses. In the meantime, I've read L'Ermitage. The issue is too good not to suffer from being so miserably corrected [...]". The book in question is very likely Gide's famous novel "The Immoralist".

In the only dated letter in this collection, from 15 March 1902, Gide announces some "very mediocre verses" by "a friend of a friend" which he was asked to forward to L'Ermitage. Despite his severe words, Gide casts doubt on his ability to judge the work and leaves the final decision to Ducoté: "I responded directly to my friend that I did not consider them good and that I could not recommend them to you [...] But (I continued to write) that I could, after all, be mistaken and that I would leave to you the office of the final court of appeal [...]". The poet in question was Maurice Cremnitz, a close friend of Guillaume Apollinaire.

Gide spent parts of the summer of 1902 "vagabonding between Biarritz and Cauterets" and planned to visit Ducoté in La Bouille (Normandy): "Yes, I am more than hoping for September; the other day a chiromancer revealed a fatal line to me, so terrible that I do not dare promise anything anymore, but please be assured that I still have the desire and that I am willing to come see you in La Bouille". Both letters in the collection mentioning La Bouille are primarily concerned with Gide's interest in the young Jacques Copeau. After congratulating Ducoté for accepting a text by Francis de Miomandre, Gide praises Copeau's manuscript but expresses some reservations with respect to its publication: "Concerning J. Copeau, I admit that his manuscript is far from displeasing to me; it is well thought, well written and emotionally intelligent; if it were not for my book, I would immediately tell you: publish. But I would have wished L'Ermitage already to have made J. Copeau known for other things; otherwise I fear that L'Ermitage will appear to publish primarily for the subject matter. Furthermore, I would like this prose to be published a little later. November, for example, at the moment when the new edition of 'The Immoralist' appears. Thus, should L'Ermitage lack a little bit of content and you, on the other hand, keep another manuscript of Copeau's in your drawer that, according to you, is not lacking in taste, could you not publish something else by him first? [...]". In the second letter, Gide renews his praise but again urges Ducoté to publish additional texts, as he finds the manuscript "a little bit meager for someone who isn't a Mr. Jammes". In 1902 only Copeau's "Notes d'Enfance" were published in the November issue of L'Ermitage. Gide and Copeau were among the founders of La Nouvelle Revue Française in 1909.

A letter concerning Gide's play "Bethsabé" is likely to be the latest item in the collection. By coincidence, both Ducoté and Gide had written plays based on the biblical story of Bathsheba. In the letter, Gide reassures Ducoté that their works can coexist: "The coincidence is curious indeed but I do not believe that there is much to worry about. What actually surprises me is the difference of our pieces since they are based on the same figures: the theme, the form, the characters, everything differs. I think this stems from the almost unlimited latitude that the Biblical description offers the imagination. And this explains how, for two so dissimilar dramas, the Bible could have tempted two so dissimilar spirits as ours but both solicitous about works of art [...]". L'Ermitage published "Bethsabé" in the January and February issues of 1903. The fate of Ducoté's play "Uriah's wife" is unknown.

Well preserved. With collector's notes in pencil. A third of the second sheet of the letter concerning Copeau's new manuscript has been cut out, but there is no apparent loss of text. 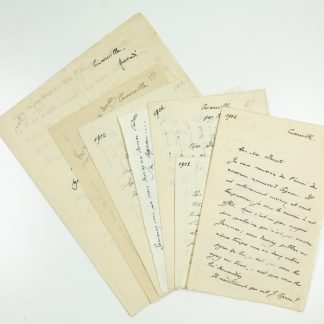